The SUPERIOR VIADUCT was proposed for improving transriver commuting in the years following Cleveland's 1854 annexation of OHIO CITY. The CUYAHOGA RIVER bridges up to that time had been "low-level," necessitating being opened for every river craft that needed to pass. City voters in Apr. 1872 approved construction of the new bridge, which was to extend from Superior Ave. and W. 10th St. on the east to Detroit Ave. and W. 25th St. on the west. Plans called for a western approach consisting of Berea sandstone arches built on piles driven 20' into the muddy subsoil. A total of 10 arches carried this portion of the viaduct a length of 1,382', 72' above the foundations. Connecting the masonry arches to the eastern portion of the bridge was a 332' pivoting center span. The eastern end of the viaduct was of girder design, 936' long. With approaches, the viaduct totaled 3,211', with a 64' roadway. Construction began in Mar. 1875; the bridge was completed at a cost of $2.17 million and opened to traffic on 28 Dec. 1878. 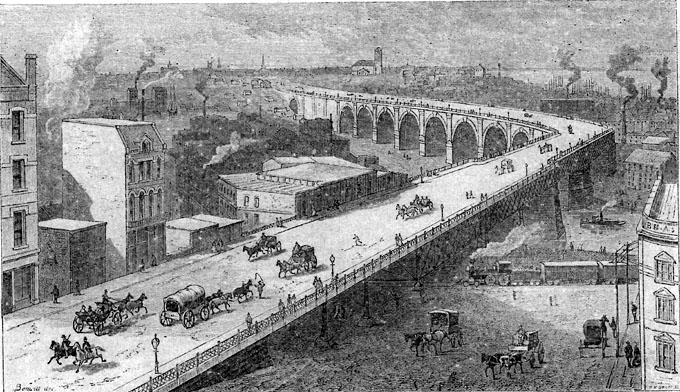 This drawing of the Superior Ave. Viaduct from the 1880s shows the full extent of the structure with traffic moving both east and west. WRHS.

Because of the center drawspan, traffic still had to halt approximately 300 times each month for an average of 5 minutes to permit river vessels with tall superstructures to pass. These delays became increasingly annoying, and the procedure itself began to take a toll on the bridge structure. Voices were raised once again for a new bridge that would be completely high-level. In 1918 the Detroit-Superior Bridge (now VETERANS MEMORIAL BRIDGE) was opened to traffic, and the Superior Viaduct was closed in 1920. Its eastern portion and center span were demolished in 1922, and in 1939 the easternmost 3 arches of the remaining sandstone segment were blasted away to allow for a widening of the river. Seven arches, a total of 600', remained in place on the west side of the river. 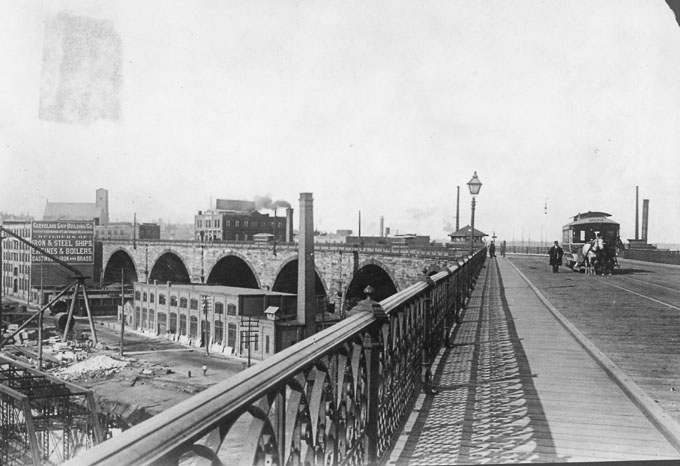 A horse-drawn streetcar stands on the eastern end of the Superior Avenue Viaduct in the 1890s. WRHS.