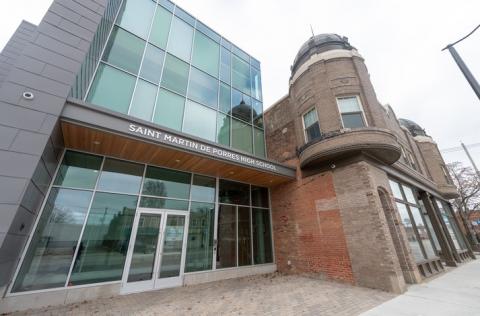 Dave Hall
Modern wing of the St. Martin DePorres High School. It is attached to the 1909 building that was formerly the Kausek Department Store.

ST. MARTIN DE PORRES HIGH SCHOOL, 6202 St. Clair Ave.,  opened with 105 students in 2004 in the former St. Vitus Elementary School.  The high school is named for the patron saint of mixed-race and working people,  born in Peru in 1679 and canonized in 1962.

The elementary school was built in 1912 for the children of the flourishing Slovenian parish of ST. VITUS CHURCH.  It reached its peak enrollment of more than 1,000 students in the 1950s and 1960s.  But like other parochial schools, St. Vitus  was hard hit by diminishing numbers of parishioners in the changing neighborhood and by the dwindling number of religious women and men to teach its classes.  St. Vitus students received state-sponsored vouchers to pay their tuition, but school administrators found these were inadequate even when supplemented by the parish’s fund-raising efforts and a bequest from a former parishioner. The school closed in 2003.

St. Martin De Porres High School is not affiliated with a parish. It is governed by a lay board, which also includes members of the Society of Jesus and the Sisters of the Humility of Mary.  It is part of the national Cristo Rey Network, whose goal is to provide low-income students with a college-preparatory education and significant job experience.  As was the case at St. Vitus School, tuition at St. Martin De Porres is paid partly by state-sponsored vouchers; these are available to students who live in Cleveland and four neighboring school districts eligible for voucher assistance.  Students also earn money in the school’s work-study program, completing internships with the school’s corporate sponsors, including non-profits like the CLEVELAND CLINIC.  Although it welcomes students of all faiths, the high school emphasizes Catholic spirituality, especially service to others.

In April 2018, having outgrown its original site, the school expanded into a renovated neighboring building, formerly a department store. The school’s enrollment in 2018-2019 was 400 students.  Co-principals in 2018 were John Fay and Ryan Hurley.