TUBBS JONES, STEPHANIE (10 September 1949 - 20 August 2008) was the first African American woman from Ohio elected to the United States House of Representatives, and served the state's eleventh congressional district for nearly ten years. Prior to her election to Congress, Tubbs Jones was Chief Prosecutor of Cuyahoga County.

Tubbs Jones was born in Cleveland, Ohio, to Mary Looney Tubbs, a factory worker, and Andrew Tubbs, an airline porter at Cleveland Hopkins International Airport. She was the youngest of three daughters, all of whom were raised in the Glenville neighborhood of Cleveland.

Tubbs graduated from Collinwood High School with acclaim and began college at CASE WESTERN RESERVE UNIVERSITY in its first year of federation, 1967. At CWRU, Stephanie Tubbs Jones founded the African-American Students’ Association (now the African American Society). Jones earned her Bachelor of Arts in Sociology and a minor in psychology in the spring of 1971. She was in Delta Sigma Theta, a predominantly black women's sorority founded in 1913. In 1974 Tubbs Jones graduated from CWRU School of Law with a Juris Doctor (J.D.).

In 1998 she attracted controversy when she refused to reopen an investigation into the 1954 murder of the wife of Dr. Sam Sheppard. (See SHEPPARD MURDER CASE) Tubbs Jones claimed that the DNA samples that Sheppard's supporters wanted reviewed were inadmissible because they were too old.

During that same year, Stephanie Tubbs Jones ran to replace Cleveland’s 11th district Congressman of 30 years, LOUIS STOKES. Tubbs Jones ran on a platform of political experience and community service, winning the Democratic nomination and continuing on to win the general election with more than 80% of the vote. She was re-elected four times and served in congress until her death in 2008.

In her first year as a congresswoman, Tubbs Jones wrote and passed the Child Abuse Prevention and Enforcement Act of 1999. Tubbs Jones’ legislative focus on children, education, and healthcare lasted throughout her time in Congress, and she authored and passed several more bills to promote healthcare and child welfare. Tubbs Jones also served on the House Ways and Means Committee, where she supported Social Security, Medicare, and progressive pension laws. 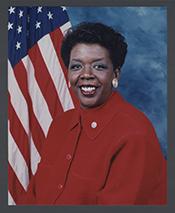 In early 2005 when Congress officially ratified the election of George W. Bush, Tubbs Jones and Senator Barbara Boxer, a California Democrat, initiated a challenge to Bush's election. The two women objected to the acceptance of Ohio's twenty electoral votes, due to voting irregularities in the state. Congressional lawmakers retreated to their separate chambers to debate the issue, and after Congress reconvened both the House and Senate voted against the challenge. It was only the second time since 1877 that a presidential election faced such a challenge.

Tubbs Jones spent much of her congressional career on the House Ways and Means Committee; after the 2006 election Nancy Pelosi selected her to chair the House Ethics Committee. Tubbs Jones co-sponsored legislation to broaden health care coverage for low and middle income people and legislation to promote programs that supported the re-entry of convicts into their communities. She authored legislation that required certification for mortgage brokers and stiffer penalties for predatory loans. Tubbs Jones was also an active member of the Congressional Black Caucus.

Various prominent political figures fondly recalled Tubbs Jones after her death, as former President Bill Clinton and his wife Hillary Clinton said that she was "one of a kind" as well as "unwavering, indefatigable." Barack Obama said "It wasn't enough for her just to break barriers in her own life, she was also determined to bring opportunity to all those who had been overlooked and left behind - and in Stephanie, they had a fearless friend and unyielding advocate."