The UNIVERSAL NEGRO IMPROVEMENT ASSN. (UNIA), active in Cleveland by 1921, was a branch of an international movement founded in 1914 that stressed black pride, racial unity of AFRICAN AMERICANS, and the need to redeem Africa from white rule. The group maintained its local division headquarters in Cleveland at 2200 E. 40th St. (see JACOB GOLDSMITH HOUSE) from 1923-40. Dubbed the "back to Africa" movement, the UNIA’s doctrines emphasized racial pride, entrepreneurialism, and Pan-Africanism. Founder Marcus Garvey, a Jamaican, opened branches in 30 U.S. cities between 1916-22. He established the Black Star Steamship Line, the Negro Factory Corp., and a newspaper, the Negro World, in which he articulated the frustrations of working-class blacks. By exalting blackness, he underscored African Americans' inherent dignity, and encouraged the formation of separate institutions out of pride, not because of discrimination. Garvey emphasized black unity based on shared African heritage. 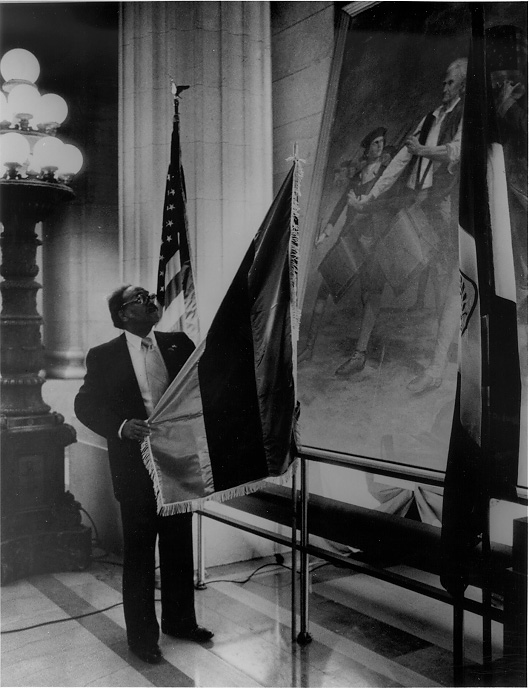 The Cleveland branch of the UNIA (Division 59 and later Division 133) was launched prior to Garvey’s first visit to Cleveland in 1920. In May of that year Garvey spoke to over 400 people at CORY UNITED METHODIST CHURCH. Energized by the UNIA’s message of racial self-help and separatism, the Cleveland branch made the UNIA a major force in local politics. Mass meetings at Liberty Hall, colorful parades down Central Avenue, visits to Cleveland by top UNIA officials including Garvey, and continuous coverage of local  activities in the Negro World, helped grow the branch to more than 5,000 members by 1922. The branch’s most popular leader during its infancy was Dr. LEROY BUNDY, a local dentist who had risen to fame protecting black people during the 1917 race riots in East St. Louis, Illinois. Because of UNIA politics and local politics the leadership of the Cleveland branch was susceptible to high turnover. More damaging to the Cleveland branch of the UNIA, however, was Garvey’s mail fraud conviction and eventual deportation back to Jamaica in 1927. As Garveyism on Cleveland’s East Side declined, many activists migrated to the FUTURE OUTLOOK LEAGUE and the NAACP, but the branch remained committed to Pan-Africanism even after Garvey’s death in 1940.

In Aug. 1940, James R. Stewart, UNIA commissioner for the State of Ohio, was elected president general. The following October, Stewart established Cleveland as the new location for the UNIA Parent Body headquarters, as well as for the site of its revived publication, the New Negro World, which published its first issue that same month. Until it folded in 1944, the periodical was one of the country’s few militant black newspapers, denouncing Jim Crow oppression and colonialism in Africa and even providing an outlet for black nationalist women’s views. The Parent Body remained in Cleveland until 1949 when Stewart took Liberian citizenship and moved the Parent Body to Monrovia, Liberia. After Stewart's death in 1964, the Parent Body moved to Chicago, where it remained until 1975. Thereafter MASON HARGRAVE assumed the president generalship and moved the Parent Body back to its former location in Cleveland. The UNIA kept its office at E. 40th until it closed in 1982. Although the site was destroyed by fire in 1988, it is recognized as a historic landmark by the National Register of Historic Places and the Ohio Historic Preservation Office. Mason Hargrave continued at the head of the organization in its later years.