The U.S. MARINE HOSPITAL, located on Erie (E. 9th) and Murrison streets, opened in 1852 to provide medical care for sailors in the U.S. Merchant Marine, the Coast Guard, the U.S. Lighthouse, and U.S. veterans. It was part of a network of 26 government-owned hospitals for seamen, authorized by Congress and the president in 1837. U.S. Marine Hospital Land for the Marine Hospital was purchased from LEVI JOHNSON and his wife for $12,000. Construction began in 1844 but was not completed until 1852. The hospital, a 3-story Ionic-style building, had 8 wards and could accommodate 150 patients. Until 1905, when Congress voted an appropriation to support such facilities, it was first financed by a tax ($.40 per year) on sailors coming into port, and later by a tax on tonnage. After the CIVIL WAR, the Marine Hospital took in soldiers as well as sailors, until 1870. As the demand for services for sailors declined, in 1874 the City of Cleveland petitioned Congress to lease the hospital. In return the city pledged to care for sailors at the fixed rate of $.50 per day. This effort failed because of the question of property rights of a railroad that ran between the hospital and the lakefront. In 1875 Cleveland City Hospital (Lakeside Hospital Corp.) leased the building and grounds for 20 years. Physical improvements were made, including an amphitheater for clinical lectures and a children's ward. With the termination of the lease in 1895 and the completion of the new Lakeside Hospital, the Marine Hospital reverted to government control (U.S. Marine Hospital Service, Public Health Service). In 1929 the building and site were sold to the Pennsylvania Railroad; a new hospital was built at E. 124th and Fairhill Rd., on a portion of the Otto I. Leisy estate. After the establishment in June 1953 of the Veterans Administration Medical Center, the closed Marine Hospital was declared surplus government property, given to the state of Ohio, and used as the FAIRHILL MENTAL HEALTH CENTER. 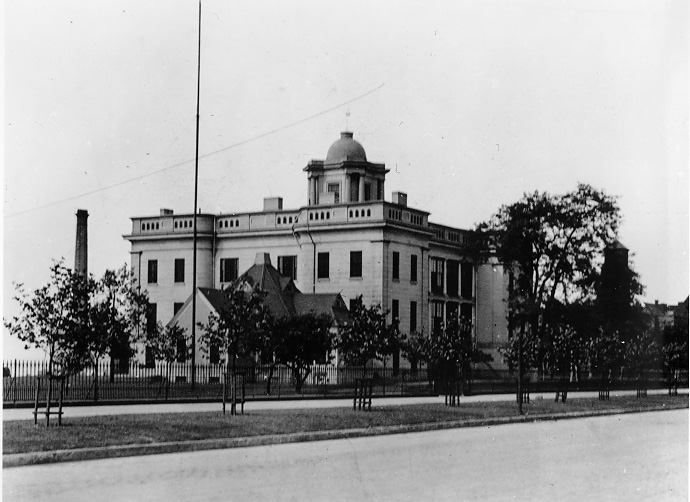 Trees and lawns surround the U.S. Marine Hospital at the northwest corner of Lakeside and E. 9th St. in this 1915 image. WRHS.