‌‌VETERANS MEMORIAL BRIDGE, ope‌ned to traffic on Thanksgiving Day 1917 as the Detroit-Superior Bridge, was the city's first ‌high-level bridge over the CUYAHOGA RIVER. Connecting Detroit and Superior avenues, it was engineered to relieve the traffic congestion that had clogged the old SUPERIOR VIADUCT, just north of the new span. Built at a cost of $5.284 million, the bridge took 5 years to complete‌.‌‌‌‌‌

Its outer ends consist of a series of 12 concrete arches; its center span, 96' above the Cuyahoga River, is an overhead arch of steel 591' in length. Altogether the bridge is 3,112' long and, including approaches, stretches 5,630'. The bridge carries 2 decks. The upper deck was designed for vehicular and pedestrian traffic, while the lower deck was to carry streetcars. The subway, as the lower deck was called, had entry ramps at W. 6th St. and Superior Ave., on W. 25th St., and on Detroit Ave. Four sets of tracks ran along the lower level, with passenger stations located at each end. By 1930, with traffic reaching a volume of 70,400 automobiles a day, the bridge was being called the "nation's busies‌t." The openings of the Lorain-Carnegie Bridge (see HOPE MEMORIAL BRIDGE) in 1932 and the MAIN AVE. BRIDGE in 1939 temporarily reduced the pressure. 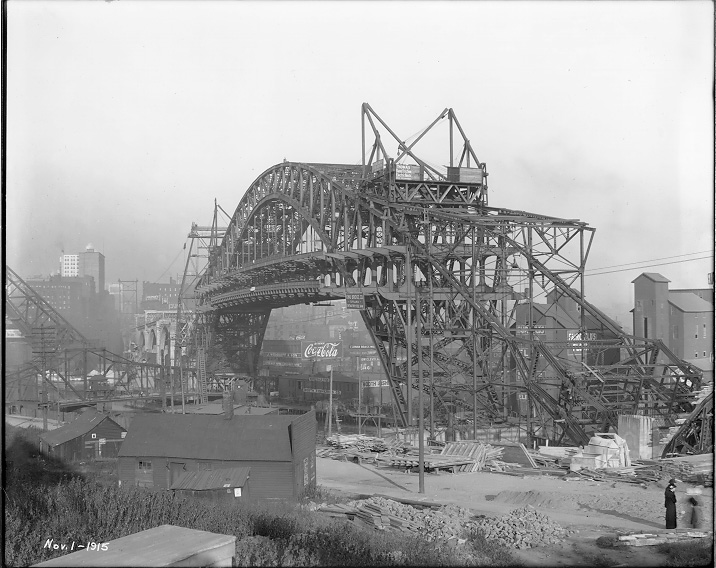 The ironwork for the main span of the Detroit-Superior (Veterans' Memorial) High-Level Bridge in this image taken on 1 Nov. 1915. WRHS.

‌With the ending of streetcar operations in 1954, the subway level stood empty and the ramps leading to the lower level were covered over in Nov. 1955. The opening of the Innerbelt Bridge in 1959 relieved some congestion, but the Detroit-Superior Bridge remained a rush-hour bottleneck. A 2-year renovation, completed in May 1969 at a cost of $6 million, included adding 2 additional traffic lanes by narrowing existing sidewalks from 15 to 5 ft. and cantilevering the new lanes outside the central arch. The bridge was renamed Veterans Memorial in Veterans Day ceremonies on 11 Nov. 1989. Placed on the Natl. Register of Historic Places in 1976, the bridge was scheduled to be completely restored in time for the 1996 bicentennial celebration of Cleveland. The $49 million "City of Bridges" project was being coordinated by the CLEVELAND LANDMARKS COMMISSION.