WORLD WAR II. When Japan attacked the U.S. at Pearl Harbor on the morning of 7 Dec. 1941, the ranking American victim was a native Clevelander, Rear Adm. ISSAC C. KIDD, aboard the Arizona. Before V-J Day, his death would be followed by those of nearly 4,000 more Clevelanders out of a total of 160,000 called to service. At home, the face of Cleveland would be greatly transformed by the demands of the war effort, while more fundamental changes set in motion by the war would contribute to the city's postwar decline. It did not take Clevelanders long to discover there was a war on. Under Civilian Defense Director WM. A. STINCHCOMB, lighting "blackouts" were being rehearsed by the summer of 1942. A special emphasis on Victory Gardens was incorporated into that year's Home & Flower Show. Rationing was implemented on the local level by 29 War Price & Rationing Boards, which were empowered to issue permits to civilians for such potentially scarce commodities as sugar, meat, and gasoline. Charged with administering the Selective Service Act in Cuyahoga County were 51 local draft boards composed of over 400 volunteers. Meeting several nights a week, board members considered classification appeals and supervised the machinery that called 3,000-4,000 Greater Clevelanders monthly to the armed services. 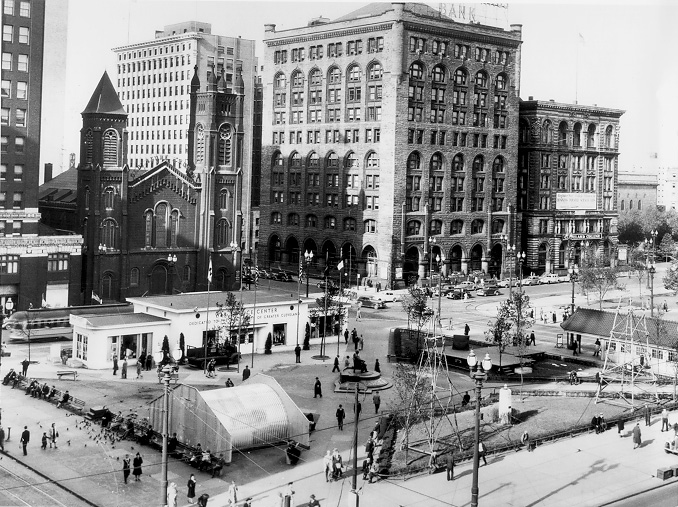 The War Services Center occupies a temporary structure on the northwest quadrant of Public Square while pedestrians and pigeons populate the surrounding area circa 1943. CPL.

As young men began departing for military training centers from CLEVELAND UNION TERMINAL, an influx of wartime government agencies helped fill the vacuum created by their absence. Contracts with 800 northern Ohio defense plants were placed by the Cleveland Ordnance District Office in the Terminal Tower. Operating from the Union Commerce Bldg., the regional office of the War Labor Board became the third-busiest in the country, handling 400 cases a week from a 4-state area. In an outdoor exhibit at Euclid and E. 9th St., the War Production Board kept Clevelanders informed of the goals and quotas of the war effort. A focus for the area's wartime activities was provided with the dedication of the War Service Ctr. on PUBLIC SQUARE. Constructed with donated materials and labor, the temporary structure on the northwest quadrant of the Square sheltered recruiting offices, war bond and stamp sellers, and such agencies as the USO, Red Cross, and War Housing Service. PLAYHOUSE SQUARE was the address of the local branch of the Stage Door Canteen, where servicemen might find hospitality and entertainment. Clevelanders could keep abreast of the war's progress by dropping in at the Telenews Theater, which specialized in continuous showings of newsreels on its Lower Euclid screen. On the home front, the area's biggest news story was the EAST OHIO GAS CO. EXPLOSION AND FIRE of 1944, which claimed 130 lives and taxed the city's Civilian Defense preparations to capacity. 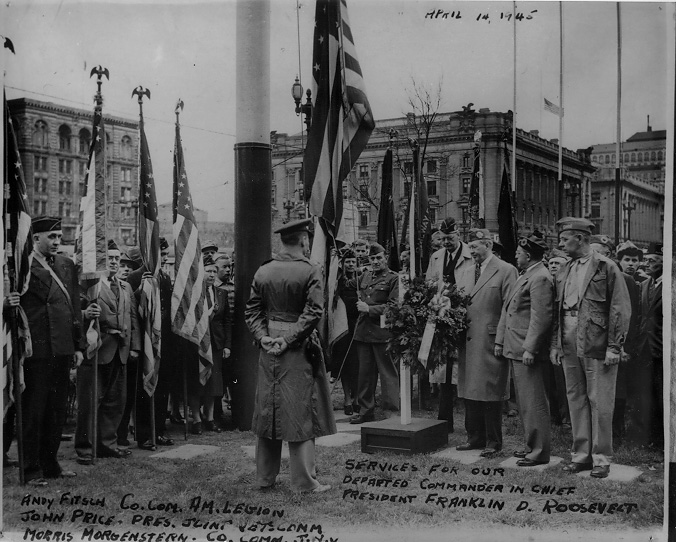 Cleveland was credited with originating the Block Plan to promote and organize various bond, blood, and scrap drives on the neighborhood level. By the 8th and final war loan drive, county residents had accounted for a total of $2.5 billion worth of bonds. There were also innumerable rallies, exemplified by the one sponsored in PUBLIC AUDITORIUM on 3 June 1942 to collect money for medical aid to Russia. Even more than bond drives and relief rallies, what Uncle Sam wanted from Cleveland was output of its industrial establishment, ranked 5th in the nation. Steps were taken to expand that industrial base by the construction of such facilities as the Thompson Aircraft (Tapco) plant in EUCLID, which had been started even before the war in 1941. By the war's end, Thompson was Cleveland's largest employer, with a workforce of 21,000 (see TRW, INC.). Two large facilities arose in 1942 on the perimeters of Cleveland Municipal Airport (see CLEVELAND HOPKINS INTL. AIRPORT). Originally planned for the production of B-29 ("Superfortress") parts, the Fisher Cleveland Aircraft plant underwent successive postwar metamorphoses as the Cleveland Tank Plant and finally the Intl. Exposition & Trade Ctr. (see I-X CENTER). On the other side of the airport, the Natl. Advisory Committee for Aeronautics constructed the world's largest wind tunnel as part of its Aircraft Engine Research Laboratory, which survives as the Natl. Aeronautics & Space Admin. Lewis Research Ctr. (see NASA LEWIS RESEARCH CTR.).

Many local plants recorded distinguished achievements in the war effort. Natl. Acme and Cleveland Twist Drill, later combined as the ACME-CLEVELAND Corp., won 2 of the war's first Army-Navy "Star" awards for production excellence. A double Army-Navy "E" Award went to Cleveland's H. K. Ferguson Co. for erecting Tennessee's Oak Ridge thermal diffusion plant in just 66 days. Perhaps Cleveland's greatest wartime success story was written by Jack & Heinz, an aircraft-parts manufacturer in MAPLE HTS. (see LEAR SIEGLER, INC.) that was singled out after the war by Donald M. Nelson, chairman of the War Production Board, for the following accolade: "By paying exceptionally attractive wages, making sure that working conditions were congenial, developing a strong sense of team play, giving workers full credit for individual and group achievements, stressing the importance of the workers' jobs to the war effort, and appealing to patriotism by explaining the needs of the armed services, this company drove production and earnings to new heights."

Thanks to the impetus of war production, employment in Cleveland by Sept. 1944 had climbed to 34% above its 1940 level. Practically the entire increase had taken place in the manufacturing sector, where employment had risen from 191,000 to 340,000 during the period cited. "Cleveland is one of the Nation's industrial centers which has expanded most since the beginning of the war," concluded the U.S. Bureau of Labor Statistics. While the national index of factory employment in 1944 as compared with 1939 was 156.3, Cleveland's index had leaped to an even more imposing 179.7 (1939=100). Such single-minded application to production was bound to produce strains in other sectors of the community's social fabric. Mayor FRANK J. LAUSCHE's War Production Committee was credited with the relative absence of strikes and other labor problems in the city. Cleveland also escaped any major wartime racial outbreaks, though labor demands would contribute to a 75% increase in its African American population during the decade (see AFRICAN AMERICANS). Careful monitoring of interracial relations was one of the weightiest recommendations of the Post-War Planning Council of Greater Cleveland, an idea that came to fruition in the creation of the CLEVELAND COMMUNITY RELATIONS BOARD.

Commuting and gas rationing combined to tax the city's public transportation facilities. From a Depression low of under 200 million, revenue rides on the newly municipalized Cleveland Transit System peaked at nearly 450 million in 1946, followed by a precipitous postwar decline. Near the end of the war, area engineers revealed a 50-year express highway plan, which envisioned a Cleveland serviced by innerbelt, outerbelt, and crosstown freeways. Other experts turned their attention to the demands that increased postwar air travel would make on Cleveland's airport. Without doubt, Cleveland's most vexing homefront problem was housing. Even in 1940, failure to replace aged housing stock during the Depression had resulted in a vacancy rate of only 3%. Wartime building restrictions and in-migrating defense workers drove that down to an infinitesimal 0.5% by Mar. 1943. "Temporary" war housing projects put up in critical areas such as BEREA and Seville could not meet the demand, as the War Housing Service satisfied fewer than half of its 35,000 applicants during its first 2 years. It did not take much studying for the Post-War Planning Council to predict "a splurge of house-building in the suburbs, following the relaxation of artificial war-time restraints upon residential construction." Unless immediate measures were begun to rehabilitate the central city's deteriorating areas and prevent further blight, the council foresaw "wholesale abandonment of older areas and catastrophic losses in investments and tax values." With admirable accuracy, the council concluded that "this boom will set the pattern of Greater Cleveland for the next generation."

The promised and prayed for victory came on 15 Aug. 1945. Within a month, a victory parade lasting more than 3 hours marched down Superior Ave., where it was viewed by 300,000 Greater Clevelanders. For those incapable of marching, a 1,750-bed veterans' hospital in PARMA had been dedicated as Crile General Hospital in 1944. A WAR MEMORIAL FOUNTAIN was promoted by the CLEVELAND PRESS and dedicated on the Mall in 1964. Perhaps an even more evocative monument was later provided by the lakefront relocation of the U.S.S. COD, a vintage World War II submarine, with its locally built diesel engines. Postwar Cleveland followed the pattern predicted by the Post-War Planning Council, as the exodus began. Space requirements had already dictated suburban locales for the larger plants constructed during the war.

Spearheaded by returning veterans taking advantage of government-guaranteed mortgages provided by the GI Bill, the labor force joined the migration to the SUBURBS. Cleveland's neighborhoods, deserted by a generation that might have rebuilt them, and decimated by implementation of the long-awaited freeway system, were inherited by the elderly and the newer minorities that had arrived to fill wartime labor needs. Largely developed to capacity before the war, the central city and its remaining citizens were relegated to the backwash of the postwar rush to the suburban frontier.