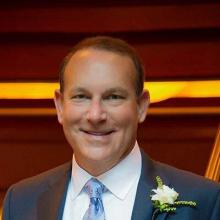 Having grown up as an independent thinker, Chaz Berman (CWR ‘73) felt destined to become an entrepreneur.

“It led me to learn to get my own answers, for better or for worse,” Berman states.

After starting his career at a very large medical supply company, Berman quickly realized that working at a large company was not what he enjoyed. He found himself bored and curious about all the aspects that made the business run, not just his department.

This curiosity and boredom led Berman to his first entrepreneurial endeavor—founding two restaurants in Las Vegas. Berman recalls, “Those [the restaurants] both failed. From that experience, I learned that there's a lot you can learn from failure. It isn't a fun thing to go through, but it was an important part of my entrepreneurial foundation.”

Despite the initial failure, Berman continued to grow his entrepreneurial skills as he launched two more businesses. This time in direct mail, an industry he knew a lot about.

As internet usage grew, Berman paid close attention, knowing it would greatly impact the world of direct mailing. Eventually, he sold his current business and went to find a company that was bringing direct mail online.

As he worked with more companies, Berman expanded his network and made a multitude of connections.

One of the connections he made was with Michael Aronoff, a fellow board member of a company they both served. Aronoff asked Berman if he would check out a company he had invested in during the late 1990s. Berman agreed and flew out to Hawaii, where the company was headquartered, to investigate.

While there, Berman found that the company had produced over 100 barrels of black liquid meant to be a plant growth enhancer. Unimpressed, Berman reported back to the founding board chairman Albert Pleus stating, “I think you should take a tax write off and tell your investors you're very sorry, but you did the best you could. Because there really is nothing there. They're not making any revenue, it doesn’t seem to be a real business.”

Unhappy with that answer, Pleus asked Berman to consider running the company; Berman said he would only consider it if they raised funds.

A year later, Berman got a phone call from Pleus, who stated, “I raised some funds, changed the organization structure. Now, would you reconsider  becoming the CEO?”

Sticking to his commitment, Berman began by spending about six months talking to universities to better understand the science; he felt that there was potential. By 2010, Berman became CEO of Grower’s Secret.

Grower’s Secret is an organic fertilizer company that is good for both a farmer’s business and the earth. It offers a variety of products for farmers, including a plant growth enhancer, organic fertilizers and supplements, as well as their newest product, an organic, high nitrogen fertilizer derived from soybeans.

The nitrogen fertilizer, as Berman explained, “Revolutionized the way farmers could apply nitrogen to the fields, because it was 99%, water soluble, no ammoniacal nitrogen, no nitrates, and could be applied with any application method.”

With over 570 million farmers in the world, many of them are not organic due to the high prices of organic fertilizers and thus, instead, opt for synthetic nitrogen, which often harms the environment.

Berman explained that with Grower’s Secret, the company is seeking to “make organic fertilizer and sell it for less than or equal to the cost of synthetic nitrogen.”

Narrowing in on this goal, Grower’s Secret is in the process of raising money to build a demonstration plant, proving that they are able to produce an organic regenerative nitrogen for less than the cost of synthetic nitrogen.

Through their research and products, Grower’s Secret is able to serve not only investors, but the community, employees and the environment.

Berman stated, “We volunteer some of our time to help others use our materials to grow food for the homeless, we measure the amount of water and trash we use, and we will have our demo plant powered by solar.”

He continued, “We want to benefit growers and farmers globally, as well as our planet. We want to do good.”

Life as an Entrepreneur

Being a CEO has taught Berman a lot about what it means to be a leader.

“One of the most difficult parts and the most nervous part about being a CEO is that you are always attempting to reduce risk,” Berman said. “In order to reduce risk, however, you have to take risks.”

He continued, “Sometimes you have no idea whether a risk will work out and you’re doing it on blind faith. It’s a big responsibility to your investors, employees and customers, so it can be very scary. But, however scary it may be, it’s necessary for success.”

When Berman attended CWRU there were no entrepreneurial programs but he credits the community, both internal and external, for positively influencing his experience.

He stated, “There were a lot of classes that I took which I really enjoyed. I also really appreciated the professors and the camaraderie of the university.”

He continued, “Cleveland is a wonderful city and it's a great close-knit community around where CWRU is situated. I found that it was important to take advantage of all that CWRU has to offer in its backyard, including the art museum, history museum, the orchestra and more.”

“Taking part in those resources and experiences were definitely an anchoring point in my development as a young man,” states Berman.

As for advice, Berman emphasized the importance of staying true to yourself.

“I think a part of being a successful entrepreneur is to  go towards who you are,” he explained. “And most people, until they get to a certain age, tend to rebel against their natural inclinations or their passions.”

“As long as you stay true to yourself, and spend time figuring out what you want to do or who you want to be, you’ll find success.”