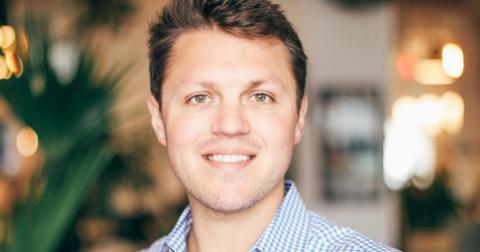 In the fall of 2005, John Knific entered Case Western Reserve University (CWRU) as a freshman ready to combine two of his interests: music and medicine.

Knific received a scholarship from CWRU that enabled him to major in music at Cleveland Institute of Music (CIM), while studying biology on the pre-med track. While the contrast in Knific’s two majors allowed him to try out and be exposed to a variety of different classes, he found that it ended up being pretty fatiguing.

During his junior year, despite knowing that he wasn’t planning on pursuing music full time, Knific studied abroad for six months in the Netherlands at a music conservatory. It was the music conservatory, however, that sparked his first entrepreneurial business.

“When I came back from study abroad, I had this idea for an E portfolio system where creative professionals could meet and share their material,” Knific stated. “I partnered up with one of my roommates who was a computer science major and we built a minimum viable product.”

From there, Knific and his roommate shared the idea with CIM explaining that their product could be a platform for students to post high resolution videos and have an online portfolio. Unfortunately, while the original idea did not resonate with CIM, they did ask how this product could be used for the audition process.

Knific explains, “A light bulb went off. After working on this product for another year, we went back to CIM and explained that we could manage virtual auditions for them. Students could supply a video rather than flying to campus.”

Knific continued, “We learned that CIM was having students mail burned DVDs of their auditions for $30. We proposed that CIM would keep $15 and we would take $15 to digitize everything.”

From there, Knific’s first business, Decision Desk was born. Knific ended up deferring his acceptance to medical school in order to continue the business and raise capital. During his first year out of school, Decision Desk was working with 30-40 different universities and had raised $100,000 in revenue.

Eventually, Knific reflected, “We unfortunately took what was a really great small business with a niche and we ended up stretching ourselves really thin. Our eyes got a little bigger than our stomachs.”

The company began expanding their offerings, and after hitting a tough year, they decided to double down in education. From there Decision Desk began building out application management tools which helped the company earn an additional $2 million in revenue. Yet, the company was still not in a great spot to grow against venture-backed expectations.

Knific explained, “I had learned a lot from this company, but I was honestly just a little fatigued by that particular business. After eight years, we decided to sell the company.”

The end of one business venture, however, quickly led into the beginning of another.

A year prior to selling Decision Desk, Knific started Wisr with one of his colleagues as Decision Desk. Intrigued by the student success space, Knific and his colleague were interested in every student having a personal board of advisors. This would include both an alumni mentor and a peer mentor, and students would have the opportunity to track their academic progress.

After stepping down from Decision Desk, Knific joined Wisr fully as a co-founder, president, and chief operating officer. From there, Wisr took off.

Wisr is a mobile-friendly platform that helps university students find and talk with alumni who are eager to share their advice and expertise. As a result, students can browse Wisr to find alumni working in fields that they are interested in exploring, and then request a one-to-one advisory session. The platform suggests conversation topics, streamlines the scheduling process and even provides a free telephone conference bridge.

Various universities have picked up the platform, enabling students to take advantage of all the resources the company has to offer. With the platform and its offerings being virtual, by the time the pandemic hit, Wisr was really well positioned.

Knific explained, “We had built a virtual student chat and engagement platform. We had a number of pilot partners in the enrollment space. Any campuses closing down their virtual visits could leverage Wisr to have applicants connect with students, staff and faculty on campus. Last year, we grew by 300%.”

Up until the pandemic, 85% of Wisr’s business was in alumni and career mentorship. As universities began to close their doors at the height of the pandemic, however, Wisr saw an opportunity to shift their offerings.

Realizing that they will be able to help universities connect their prospective students with campus ambassadors, Wisr reached out to over 100 universities across the country.

“We positioned, almost overnight, a set of functionality that would bring a university site live inside of one week.,” Knific remarked. “Within days, we had half of the Ivy League, 10 of the top liberal arts and about 15 other schools, call us to sign up and launch Wisr as quickly as possible.”

By May 2020, Wisr was able to triple their revenue, jumping from $400,000 in 2019 to $1.2 million. After their major success, Wisr caught the eye of the Education Advisory Board (EAB). Being the largest education technology player in the world, Knific and his team decided to sell Wisr to EAB. Knific now works at EAB helping to integrate their two products and continue to help Wisr succeed.

“I never intended to go into education or even into software,” Knific explained while reflecting on his entrepreneurial journey. “But that’s life. Everything is connected and you have to jump on opportunities when they present themselves.”

Knific’s decision to defer his acceptance to medical school in pursuit of an entrepreneurial journey was scary, but, for him, the excitement drove him to take the risk.

“At the time, it did not feel like that hard of a decision.” Knific continues, “It would have been very easy to just stay on the medical track, because it was a very logical track. It was definitely a little scary making the switch, but taking the risk excited me a lot more than following the logical path.”

Knific’s time as an entrepreneur was a learning experience, marked with a lot of growth.

He stated, “I think, as a young entrepreneur, it's easy to get very excited about something and want to move really quickly, which is a strength in and of itself.”

However, as Knific continues, it’s important to slow down and constantly question your assumptions. If not, he explained, you’ll end up in a really tough situation.

“Having a broad perspective is incredibly necessary because you always need to be ready and adaptable to keep an eye out for potential issues.  But, truthfully, the only way to gain that perspective and zoom out of a situation is through repeated experience.”

Knific continued, “Always document what your assumptions were and do not be afraid to question them and know that you will be wrong a lot. To check your assumptions constantly, is an incredibly important discipline.”

Knific credits both the classes at CWRU and the students in helping him along his entrepreneurial journey and finding his passion.

“If I hadn't gone to CWRU I wouldn't have been around such a diverse number of smart kids. Regardless of what classes I was taking, those relationships shaped what I ended up doing,” Knific explained.

He continued, “I snuck in an Entrepreneurship minor at the end of my college career because I realized I was really into it. Those classes really helped to solidify my passion for entrepreneurship and prepared me for the real world.”

As for CWRU students interested in entrepreneurship, Knific tells them to see the full picture of the field.

“I think the initial spark of a lot of entrepreneurship programs was this idea of coming up with a pitch and pitching for capital. But entrepreneurship is about driving value and solving problems better than a competitor.”

Without the broad focus, Knific notes, it’s hard to be successful within the field.

“Being really disciplined about how you're driving that value will result in good things. Having an adaptable range is really important. You have to be able to zoom in quickly and make a decision, but zoom out and not dwell,” Knific stated. “Because there's such a range of things that you end up having to do, that are going to be both in and outside of your comfort zone.”