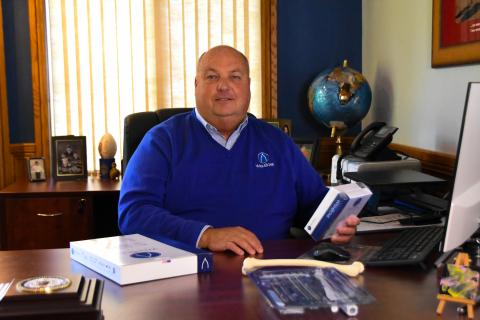 For Nick Deeter, entrepreneurship runs in the family. With his grandfather and four great uncles all being entrepreneurs, Deeter was destined to follow in their footsteps.

After obtaining a Bachelor of Science at Purdue University, Deeter began working towards his MBA at Case Western Reserve University (CWRU). While entrepreneurship had always been at the forefront of his life, Deeter explained that it wasn’t until he began pursuing his business degree that he gained the knowledge he needed.

“It was after college, while at Case Western, where I really started to see what entrepreneurship was,” Deeter explained. “Learning the different aspects of business really allowed me to be an entrepreneur and have the confidence to explore that path.”

While CWRU gave him a solid business foundation, Deeter also credits his family. “Because of my family, and the entrepreneurial background of my grandfather and his brothers, I’ve always had the confidence to take risks—knowing that if I failed, I could learn from the experience, recover, and try a different approach.”

After receiving his MBA, Deeter went on to create 12 different companies—persevering through what he deems as four “miserable failures”, as well as four functioning operations that had no revenue. He didn’t let these experiences hold him back and went on to create four  hugely successful companies.

His determination led him to his most recent business venture, WishBone Medical, which is making a difference in the quality of life for children with orthopedic issues. .

In 2006, Deeter started OrthoPediatrics, which focused on making orthopedic implants for children. After leaving the company in 2015, Deeter continued down the path of orthopedics and got involved with a company that made foot and ankle products. It was here, after the company made a move to Warsaw, Indiana, that Deeter had an epiphany.

When assessing the company’s inventory, Deeter noticed that everything was packaged in “beautiful, little sterile packaged kits.” Within these kits, all implants, instruments and everything needed for any type of foot and ankle surgery was included.

According to Deeter, “That’s really where the lightbulb went off for me with WishBone. If we could make anatomically appropriate implants for children and put those into sterile, single-use disposable kits, I can get those anywhere in the world to fix kids. That was the goal from day one.”

WishBone came to fruition in 2017 and, since then, has grown into a major company.

“We don’t look like your typical four-year-old company,” said Deeter. “We’re up to 190 full time employees and we have operations around the world. We've made six acquisitions in the last 24 months. It's gone from a fun, little entrepreneurial venture to a very fast growing, dynamic company.”

As a pediatric orthopedic company, WishBone Medical is focused globally on the unmet needs of children suffering from orthopedic issues. The goal of the company is to provide anatomically appropriate solutions in single-use, sterile packed procedure kits to both surgeons and their patients because, according to Deeter, “kids are not just little adults.”

Unlike other orthopedic companies, WishBone Medical creates implants that take into account the major physiological elements that differentiate children’s anatomies from that of adults. As a result, pediatric patients are able to receive implants that better fit their needs.

For Deeter, one of the best parts about WishBone is seeing  how an anatomically appropriate implant can change a child’s life

“I've been in close to 1,000 pediatric surgeries over the years,” Deeter explained. “Being in that many surgeries and knowing that the implants we create are going to ‘fix’ a child, whether it’s for a traumatic accident, or correcting a deformity, that's the beauty of orthopedics.”

Deeter continued, “So many of these parents and children are terrified when going into surgery, but being able to come out of it with a great result, there’s just nothing more gratifying. It’s amazing to create product systems that fix children from their collarbone down to their feet and ankles.”

While Deeter and his team at WishBone find it rewarding to help children, he also finds meaning in being an entrepreneur.

According to Deeter, one of the most rewarding aspects of being an entrepreneur is being able to watch his employees flourish.

“I love seeing people in the organization grow and blossom. I enjoy seeing others prosper while working right alongside them. That's very, very gratifying to me,” Deeter said.

As CEO, he strives to create an enjoyable and engaging work environment. “I really pride myself on being a fun, energetic, and growing company. In big corporations, you're sometimes only a number and you don't always feel like you're part of the organization.”

And how does Deeter accomplish creating this environment?

One way is by hosting a cookout for his new employees. Deeter remarked, “How often does the CEO stand there at the grill and feed everybody? For me, it’s not only fun, but I get to connect with everyone. As a result, it makes for a really good culture and makes it fun to be here.”

Although being an entrepreneur has its many rewards for Deeter, entrepreneurship doesn’t come without its hardships.

Deeter explained, “Sometimes it truly is like taking two steps forward and one step backwards. You are constantly challenged with all the different hurdles that there are out there.”

But, nonetheless, Deeter said that these challenges are what makes his job so much more exciting than working in the corporate world. He pointed out that, with vision, persistence and motivation, success will come.

“For me, I just don't find the big corporate side of things challenging. It's when you sweat the payroll and put everything on the line for something you believe in. That gets to be exciting.”

Deeter credits CWRU’s professors for creating a learning environment that was “more so an experience than just a simple classroom.” As a result, Deeter was able to learn firsthand from professionals with ample experience.

“Most of my professors were either board members or consultants for companies in the Cleveland area,” he said. “They weren't the typical professor who wrote the textbook that was used in their class. They had real life work experience. I found it very fascinating. We got to visit companies and meet with people. That was invaluable.”

Even in Deeter’s professional career, CWRU still plays a part, working with many members of the CWRU community.

“I've had the honor of being able to work with a number of Case Western alumni in the medical field because Case has such a great medical school,” he explains. “We have some key opinion leaders here at WishBone that are surgeons that we tap into for their ideas and develop new products with them. We try to work with [CWRU] alumni whenever we can and it's a lot of fun.”

Although it is easy to get discouraged, Deeter stressed that CWRU students should never give up. “Don't let anybody tell you that you can't do it.”

Despite this, he cautions, “It’s okay to fail. You will fail, but those are the opportunities where you learn the most,” states Deeter. “When I look back, I had some miserable failures, but that's where I figured out how to get through tough times.”

According to Deeter, one should expect many challenges and failures, but it is in those moments that result in the greatest lessons. He notes that if you put your mind to it, seek out the necessary resources and find the right mentors, you will be unstoppable in pursuing your dreams.