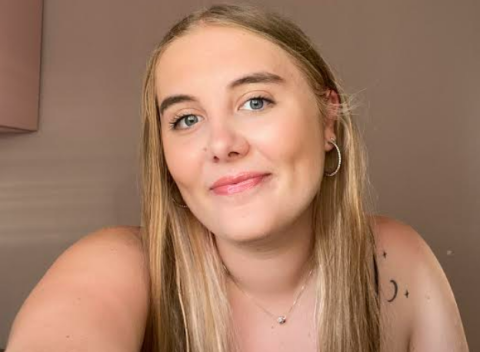 Paola Van der Linden is a third-year student from Monterrey, Mexico whose passion for sustainability, climate change awareness and community engagement is just as infectious as it is inspiring. And better still, the neuroscience and sociology double major has found the perfect way to channel her energies at Case Western Reserve as a member of the Climate Action Network, which is part of the Culture Change for Climate Change (CC4CC) initiative. Funded through investment by the Office of the Provost, CC4CC seeks to unify and scale climate action at and by Case Western Reserve. This past academic year, Van der Linden helped to plan and lead the university’s inaugural Climate Action Week and this summer, she’s been busy planning the next one, scheduled for September. Learn more about Van der Linden and how she strives to be a force for positive change as a member of the campus community.

What drew you to Case Western Reserve from Mexico?

I knew that Case Western Reserve had a really good pre-med program, so at first, that’s what led me to apply. Plus, I knew that the school offered a lot of research based opportunities. But then once I started classes, I realized that I was a lot more into the social sciences than I was the hard sciences.

How did you become a member of CC4CC?

I tend to be intellectually driven and I have a lot of academic questions. And once I got to know my professors, they had a lot of interesting things to offer. So I applied to be a sustainability ambassador between my first and second years. I was supposed to study abroad last year, but that was canceled because of COVID, so then I was offered a position on the Climate Action Network. And there, I met so professors who do so many amazing things. Talking to them and spending time with them allowed me to find the engagement opportunities that I was searching for. I think that if you find the right people, the network is already there, you just need to put in your part.

In neuroscience, there's a really interesting connection between the ability to see sociological studies through a neuroscientific lens—there's a lot of connection with epigenetics, for example, and being able to quantitatively prove certain social situations. I just found that very intriguing. I think that the sociology part of understanding the community and the social effect is something that has always been really interesting to me. And with climate change, there are a lot of social factors that are in play because we know the science is real. We know the science is there but there’s not enough mobilization of people and there’s not enough people asking for change. So I’m curious about why people don’t mobilize and what makes them mobilize.

What have you learned about mobilizing people to advocate for change after helping to plan Climate Action Week?

When I was younger and in high school, I was more focused on individual action and the changes we could all make as individuals. But when I came here to Case Western Reserve, I realized that advocacy and advocating for policy change is the way to have a larger impact. So, for example, understanding how each of us is influencing climate change is important, but so is getting larger organizations like the university to commit to certain changes. I also think an important lesson we learned from the first Climate Action week was that educating people is the first step to getting them to engage. I think we assumed that a lot of people know about climate change and they knew what to do. But now we realize that we need to take a few steps back and present basic information so that people have a foundation of understanding to work from.

Now you’re planning a Climate Action Week to kick off September 24—what’s in store for that?

We have three main areas—advocacy, education and service. For advocacy, we want students to see the impact that they can have when they reach out and talk to their legislators. So we’re looking at which legislators we need to speak to locally and who we need to engage with in the community. And with education, we are going to post signs around campus which will serve as a way to educate the campus community on the basics of climate change. And finally, we’re going to work with the Center for Civic Engagement and Learning to provide service events throughout the week.

Have these experiences impacted what you want to do after you graduate?

Earlier this summer, I probably would have said that I wanted to go to med school and become a doctor. But after this experience of working so closely with so many talented faculty, I realize that I love the university bubble. I’m hoping now to earn my PhD and to become a professor somewhere. I love spending time with my professors and learning from them and engaging in actions that shape the community. They’ve inspired me and I want to do the same for others.