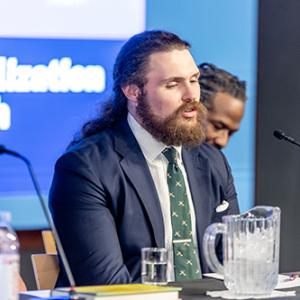 Panelists discussed the racist origins of the war on drugs and how drug prohibition itself is exacerbating the country’s overdose crisis. Rich discussed his research, which investigates how government interventions to reduce prescription opioid access have led to higher rates of black-market opioid consumption that is fueling the fentanyl-overdose crisis in the United States. He then discussed how the war on drugs has targeted the Black community and how disparities in arrests and incarceration can be alleviated through drug liberalization efforts such as marijuana legalization. Rich’s research is now funded by Case Western Reserve University’s Graduate Student Council Diversity, Equity, and Inclusive Excellence research award.

Although there was mostly agreement among the panel, various topics like the morality of drug use and the most efficient means for reparations were debated throughout the night. The event was organized by Johns Hopkins University Students for Sensible Drug Policy, Veronica Wright from the National Coalition for Drug Legalization, and Reason Foundation. Visit this website to view the symposium video.