Tips for High-Impact Teamwork: Using caution on the ladder of inference 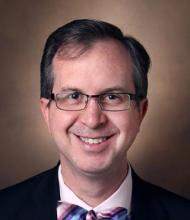 In my previous role as vice chair for education in a pediatrics department, one of my responsibilities was to meet with residents in my assigned cohort who had received a formal complaint from a co-worker.

On one such occasion, I was meeting with a resident after a non-physician colleague had submitted a complaint because the resident appeared to hang up the phone on the colleague. Frustrated that such a situation led to a formal report without the opportunity to talk directly to the colleague first, the resident commented: “Yes, Dr. Reimschisel, I did hang up the phone…because I thought we were done talking! I didn’t mean to hang up on her. Why didn’t she just call me back so I could apologize and we could continue the conversation?” Based on our further conversation and the wording of the complaint, I believed the resident honestly did not mean to hang up the phone prematurely.

I am sure many of us have mistakenly hung up the phone or clicked out of Zoom before realizing the other party still had something to say or wasn’t finished with the meeting. Fortunately, when we make this mistake, it does not typically lead to an official meeting with our supervisors.

In this Tips for High-Impact Teamwork article, I would like to discuss what I have found to be one of the most effective ways to improve communication and avoid inadvertent misunderstandings between team members, especially for teams that are experiencing dysfunction. It is called the ladder of inference.

As I explain the rungs in the ladder of inference, then describe how the ladder can be used to help avoid misunderstandings among team members, the key point to remember is that our brains quickly and automatically run up the ladder—in many cases without our conscious awareness.

The ladder of inference starts with observation, when we notice or perceive the things we see, hear or experience. However, our brains typically select what appears to be the most relevant data and do not process all available information. Nonetheless, because we are a meaning-making species, our brains automatically add meaning by filling in the gaps where there is missing data.

The problem with creating meaning is that it often occurs with inadequate or incomplete data. It can often lead us to make incorrect assumptions and conclusions to form beliefs about senior leaders, supervisors, teammates, family members and persons in the news, and cloud our interpretation of situations and events.

We may not have any control on these automatic processes. But we do have the ability to control ourselves before stepping on the very last rung of the ladder—acting on our untested beliefs.

Real ladders come with a warning label on the final rung, “THIS IS NOT A STEP.” You can fall and hurt yourself and others around you.

I would encourage you to take the same approach with the ladder of inference. Don’t step on the last rung by acting on untested beliefs! Instead, take the time to check your inferences and assumptions. This is a crucial aspect of effective teamwork that it is Behavior #6 in Roger M. Schwarz’s mutual learning approach (see Smart Leaders, Smarter Teams).

When (Not) to Act

I know we all frequently take in a single incident, fail to test our judgments, and then use those judgments to reinforce erroneous beliefs. This is particularly problematic if we have a “difficult” co-worker or work on a team where some members do not get along.

In those situations, we are much less likely to give each other the benefit of the doubt or show each other a bit of grace. Instead, we too often firmly plant our feet on the last rung of the ladder and act on inferences, assumptions and beliefs that are wrong or only partially accurate. This exacerbates the interpersonal problems with co-workers and teammates because they feel misjudged, misunderstood and disrespected, which reinforces their partially incorrect beliefs about us.

What can we do to avoid prematurely stepping on the last rung of the ladder of inference and acting on false beliefs? To quote the title of Thomas Kida’s book, “Don’t believe everything you think.” Instead, test your assumptions, conclusions and judgments before you act on them. Pause to ask clarifying questions, confirm that what you thought you heard was actually what the other person said and meant, take the time to collect more information, and commit to gleaning any pertinent data that will help fill in the gaps in your incomplete knowledge.

At this point in my team coaching, I frequently hear the refrain: “But we don’t have time to do all of that! We are busy!” Yes, this can take time. But isn’t it better to invest the time in this process now instead of having to take even more time later to apologize and then try to mend the relationship after you made a mistake you could have avoided?

Remember, there is no guarantee you will be able to fully repair the impact or damage that your misstep caused. I much prefer to deliberately try to avoid mistakes than to take the time to apologize to my colleagues.

So, how do we balance avoiding actions based on incorrect beliefs while maintaining our workflow and being productive? I recommend pausing to carefully test a judgment, assumption or belief if the action you would take could have an untoward or a significantly detrimental impact on the other person, the team or the situation.

For example, in my story at the beginning of this article, filing a formal complaint against a co-worker is a significant action because it requires an official meeting with the co-worker’s supervisor. In situations like those, it is prudent and respectful to invest the time in testing our inferences, assumptions and other judgments before taking such a momentous step.

I will conclude with an anonymous quote (though it is frequently and incorrectly attributed to Viktor Frankl):

Between the stimulus and response, there is a space.
In that space lies our freedom and our power to choose our response.
In our response lies our growth and our happiness.

As you work in your teams and engage with others, I encourage you to take the time to test your inferences, assumptions, conclusions and beliefs before acting on them. I believe this process leads to growth for you and the team as you learn more about each other, and it can help foster more job satisfaction and happiness.