Life as a Fellow

Our fellowship is structured to incorporate both clinical and academic responsibilities in both years of training. Abstract and manuscript writing, critical appraisal of literature during conference, national meeting/conference attendance and instruction in vascular laboratory studies are encouraged during fellowship.

Two fellows are selected per year. The first-year fellows clinical responsibilities include:

The vascular service at University Hospitals Cleveland Medical Center is broken down into two smaller services with 2–3 attendings surgeons on each service. The fellow or senior integrated resident will take responsibility for the care of one of the two services while on duty at University Hospitals Cleveland Medical Center.  The senior fellow also runs twice weekly conferences composed of scheduled interesting angiographic cases, journal club, morbidity & mortality conference and resident tutorials. All fellows are required to sit for the Vascular Surgery In-Training Exam (VSITE) annually. Fellows perform home-call and have the support of an in-house surgical resident night float team, including a postgraduate year four, a year two and two postgraduate year ones.  Home-call duty is typically one night per week and every other or every third weekend.  We support one meeting per year which includes attendance to the Society for Clinical Vascular Surgery SCVS meeting for the first-year fellow and the Wesley Moore Course in California for the second-year fellow. Additionally, a dedicated course is attended by our fellows in preparation for the Registered Physician in Vascular Interpretation (RPVI) exam.

Operations and Procedures Performed by Fellows

Fellows also will be taught the full range of complements to endovascular surgery, including: 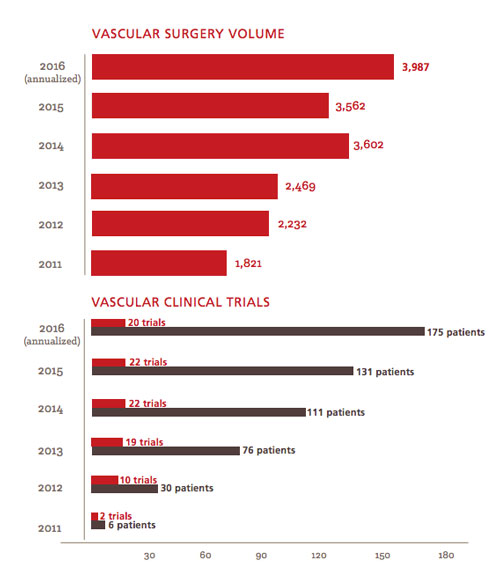 More information on the application process can be obtained by contacting Meggi Lensman.

As of 2019/2020, two fellows will be selected every year after the completion of the formal application and interview process. Candidates for the fellowship typically apply two years before entering the training program.

Candidates for the fellowship program must complete a full residency in general surgery leading to American Board of Surgery certification or board eligibility by the start of the fellowship.