Go to case.edu
Jack, Joseph and Morton Mandel School of Applied Social Sciences
The Center on Poverty and Community Development

Research on the Foreclosure Crisis 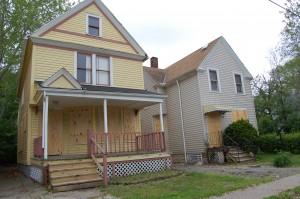 Before there was a national housing crisis there were the experiences in the Rust Belt: subprime lending, balloon payments, mass foreclosures, houses in perpetuity that sat abandoned and without value. That said, Cleveland, Cuyahoga County, and the region have been examining the issues related to vacant and foreclosed housing for over a decade now, and the Center on Urban Poverty and Community Development has been a linchpin in the region’s attempt to empirically examine the problem of foreclosures so that it does not occur again.

Below are the results of much of this investigation. It represents an in-depth and thorough body of research that will be looked at not only by local officials, community developers, and academics, but also by those disciplines’ national colleagues who are just now coming to grip with their own real estate crisis. In all, the analyses will prove valuable in the wealth of information gained, with the hopes, then, of returning value to our cities’ housing stocks.

N. G. Griswold, B. Calnin, M. Schramm, L. Anselin, P. Boehnlein (February 2014)
This two-part empirical analysis – produced by the Griswold Consulting Group for the Thriving Communities Institute – focuses on the effect that residential demolition has had on real estate equity and mortgage-­foreclosure rates in the Cleveland area between 2009 and 2013. Just over 6,000 demolitions were completed, suggesting a $22.6 million net benefit attributed to demolition activity, shown to accrue primarily in high and moderately functioning markets. Conversely, findings suggest that little real estate equity return is available from demolition activity in weak real estate markets. Findings show a clear trend of decreasing mortgage-­foreclosure rates in areas where demolition intervention activity took place. This is true for the study area as a whole as well as in low, moderate and high distress neighborhoods.

The Role of Investors in the One-To-Three Family REO Market: The Case of Cleveland

F. Ford, A. Hirsh, K. Clover, J. A. Marks, R. Dubin, M. Schramm, T. Chan, N. Lalich, A. Loucky, N. Cabrera (December 2013)
Convened by the Joint Center for Housing Studies at Harvard University and the What Works Collaborative, this report shows the effects of investor-ownership on foreclosed properties. Nearly one out of every three Cleveland homes sold by banks after mortgage foreclosures end up condemned, abandoned, boarded up or demolished. Hazard-rate analysis shows that the failure rate for these transactions is five times higher for larger investors and out-of-state buyers than for small investors. Properties that ended up in the hands of land banks, community development corporations and governments, when compared to small investors, were three times more likely to succeed. The study is the first to take a long-term look at the impact of foreclosure in Cuyahoga County.

Read more about it.

Get the full story.

Stalling the Foreclosure Process: The Complexity Behind Bank Walkaways

M. Schramm, A. Hirsh, D. Vadapalli, D. J. Van Grol, Esq., K. Moine Nelson, Esq., C. Coulton(February 2011)
Recent reports in the media raise concerns that banks are walking away from foreclosed houses, leaving the owners and houses in limbo. It has proven difficult to quantify the problem because the term lacks clear definition and local data sources do not contain information specifying the cause of creditors’ actions. Moreover, there are many factors that can delay or disrupt the foreclosure process, but over time these factors may be resolved, raising the possibility that the foreclosure may eventually be completed. This report takes an in-depth look at stalled foreclosure cases in Cuyahoga County in order to describe the factors involved in these delays and determine whether it is possible to recognize potential bank walkaways using public records.

Get the full information.

REO and Beyond: the Aftermath of the Foreclosure Crisis in Cuyahoga County, Ohio

C. Coulton, M. Schramm, A. Hirsh (September 2010)
Administrative data from agencies in Cuyahoga County is used to examine property transfers and property value after foreclosure. Though the focus is on the county, some foreclosure-related processes and phenomena are also applicable to the greater Northeast Ohio and across the United States. Communities have partnered with local researchers, using data to strategize and focus efforts on REO (real-estate owned) property remediation. Examining the growth and waning of REO property inventories can help communities understand the forces behind the movement of REO properties from sheriff’s sale out of REO; it can also help communities strategize relationships with the most significant REO owners.

Facing the Foreclosure Crisis in Greater Cleveland: What happened and how communities are responding

C. Coulton, K. Wertheim Hexter, A. Hirsh, A. O’Shaughnessy, F. G. C. Richter, M. Schramm (June 2010)
Absent from much of the research published on foreclosures in Cuyahoga County are the local responses – some traditional, others highly innovative – to the crisis. What are community groups and local governments doing to address the crisis and its spillover effects, among them a glut of vacant and abandoned homes? What is being done to prevent a future occurrence of similar magnitude?

Behind the Numbers 8: Trends in ‘Home Purchase Loan’ Origination in Cleveland and Cuyahoga County: 1995-2008

C. Coulton, M. Schramm, A. Hirsh (December 2008)
Research by the Poverty Center in 2007, Cuyahoga County properties auctioned at sheriff’s sale remained in REO (real estate owned) about three times longer than before the foreclosure crisis began and when sold out of REO, lost an astonishing 56 percent of their market value. Using property deed information from the Cuyahoga County Auditor located in NEO CANDO, this report examines the trend of properties sold at extremely distressed prices from 2005-2008, the most frequent sellers and buyers of these properties in 2007 and 2008, time between transactions of properties, the price of properties in subsequent transactions, and limited information about the practices of some buyers and sellers of REO properties.

Pathways to Foreclosure: a Longitudinal Study of Mortgage Loans, Cleveland and Cuyahoga County, 2005-2008

C. Coulton, T. Chan, M. Schramm, K. Mikelbank (June 2008)
Foreclosure rates in Northeast Ohio have grown exponentially in recent years, presenting unprecedented challenges for communities, governments and households. Subprime lending has increased markedly and is widely believed to have played an important role in the current foreclosure crisis. This study takes a deeper look at the connection between foreclosures and the circumstances surrounding the mortgage loans that are the subject of these foreclosure filings, finding that by far the strongest predictor of a loan foreclosing is its status as a high cost subprime loan. Home purchase loans that were high cost subprime had an 816 percent higher chance of going into foreclosure and subprime lending accounted for 84 percent of the foreclosures on home purchase and refinance loans in the study period.

Foreclosure and Beyond: a report on ownership and housing values following sheriff’s sales, Cleveland and Cuyahoga County, 2000-2007

C. Coulton, K. Mikelbank, M. Schramm (January 2008)
Losing a home to foreclosure and sheriff’s sale has become an increasingly common occurrence and can be devastating to home owners and neighborhoods. Homes that are sold at sheriff’s sales may sit vacant and the longer the homes sit vacant, the more likely they are to deteriorate and lose value and have spillover effects, such as becoming nuisances or undermining the desirability and value of the surrounding area. This study focuses on the cumulative effects of increasing foreclosure rates in Cleveland and Cuyahoga County and attempts to answer: What entities take ownership of these foreclosed properties and for how long do they hold them? Who purchases these homes next, and how do the sales prices compare to the value of the homes before?

Behind the Numbers 6: Houses In Transition: a Report on Properties Owned by Financial Institutions and Real Estate Organizations in Cuyahoga County, 2007

M. Schramm, C. Coulton (September 2007)
Highest in the state, the rapid rise in foreclosure rates and housing abandonment in Cleveland and its surrounding suburbs threatens to overwhelm the government agencies and community organizations that address the problem. Abandoned homes and buildings have a significant impact on a neighborhood, threatening housing values and contributing to disorder and decay. The end point for many foreclosed properties is sheriff’s sale, often purchased by the lending institution that holds the lien, real estate organizations, or HUD or the VA. It often takes considerable time for properties owned by these to return to individual ownership and occupancy, and there is concern that the concentration of unoccupied homes may become problematic for the community.

Get the full report.