The CLEVELAND HERALD AND GAZETTE was first published on 19 Oct. 1819. It was the city's second newspaper and, after the death of the CLEAVELAND GAZETTE & COMMERCIAL REGISTER in 1820, its only newspaper for the next 7 years. It was founded by Eber D. Howe, who personally delivered the weekly to subscribers in a 2-day circuit on horseback to Painesville and back, and often accepted payment in kind. After Howe's withdrawal in 1821, with circulation painfully built up to 300, the paper was published by its printer, Ziba Willes & Co. Willes ran the paper for several years, after which it was briefly operated by Jewett Paine and John R. St. John. Benjamin Andrews assumed control on 17 Apr. 1832. Following the lead of the CLEVELAND ADVERTISER, he dropped the a from "Cleaveland" in the paper's title and, in 1835, made the Herald Cleveland's first daily newspaper. In 1837 JOSIAH A. HARRIS and CHAS. WHITTLESEY purchased the Herald and combined it with the CLEVELAND DAILY GAZETTE as the Herald & Gazette. Whittlesey left the partnership in 1838, leaving Harris as sole editor of the Herald, which resumed its former name in 1843. Under Harris, the Herald established itself as the city's chief Whig organ, prospering in spite of its opposition to the MEXICAN-AMERICAN WAR. It installed the city's first steam-power press in 1845 and moved into its own 4-story building on Bank (W. 6th) St. at the beginning of 1851. It was receiving news by telegraph by 1847 and, in conjunction with the PLAIN DEALER, arranged to receive the reports of the Associated Press from New York in 1854. 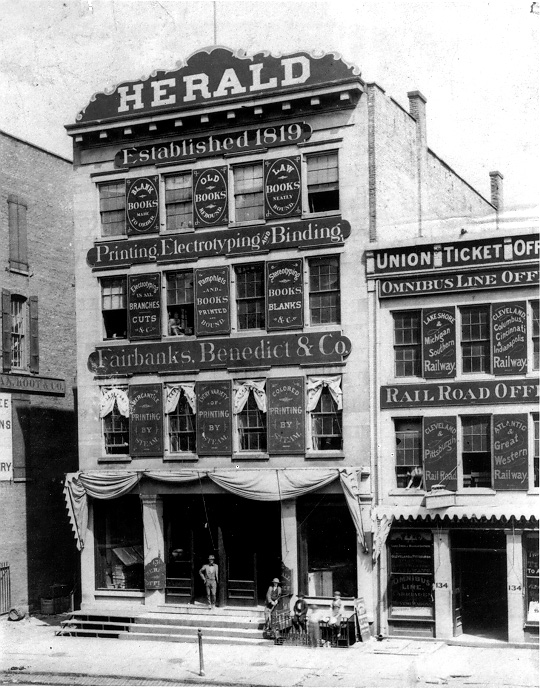