EUCLID AVE. follows the historic Lake Shore Trail once plied by Native Americans. It was laid out by Cleveland village trustees in 1815 and surveyed the following year. It takes its name from the small settlement of surveyors to the east in EUCLID, but as late as 1825 it was known as the Buffalo Rd. because it served as the major route to that city. It was recognized by the state legislature as a highway in 1832, and 2 years later it was covered with planks to the city limits. DUNHAM TAVERN, now a museum, served as a stagecoach stop and inn along the highway. Along its route between Erie (E. 9th) St. and Willson Ave. (E. 55th St.), Cleveland’s foremost men of wealth began to build mansions set in deep, spacious lawns. JOHN D. ROCKEFELLER purchased a home there in 1868, where he lived until he moved to New York City in 1884. The street gained the official status of an avenue in 1870, and no avenue in the world, it was claimed, presented such a “continuous succession of charming residences and such uniformly beautiful grounds.” In the 1870s, fine residences began to fill the open spaces east of Willson Ave. Cleveland architect CHAS. F. SCHWEINFURTH designed no fewer than 15 mansions there over the years, many in the Romanesque idiom that seemed to be an architectural equivalent for the ambitions of Cleveland’s most prominent industrialists and financiers. It was still fashionable in the early 1900s to build a mansion on Euclid Ave.—those of Leonard C. Hanna (1904) and SAMUEL MATHER (1910) were among the last—but Euclid Ave. was becoming increasingly important as a commercial and traffic artery.

The portion of the street between PUBLIC SQUARE and E. 9th St. transformed rapidly into a densely built Downtown district between about 1890 and 1910. Euclid Ave. was home to most of the city’s major department stores and dozens of smaller retailers (see RETAIL BUSINESS). By the early 1920s, with the completion of the theaters at PLAYHOUSE SQUARE, Downtown expanded along Euclid Ave. as far east as E. 17th St. Likewise, the DOAN’S CORNERS area around Euclid Ave. and E. 105th St. emerged as what some called Cleveland’s second downtown by the 1920s. A third commercial node appeared in the 1890s and 1900s where the PENNSYLVANIA RAILROAD passed over Euclid Ave. at Willson Ave. (E. 55th St.). The encroachment of commerce prompted many wealthy families to move eastward into the WADE PARK ALLOTMENT or SUBURBS such as CLEVELAND HTS. and SHAKER HTS. By 1937, of the 40 great houses that had formed “Millionaires’ Row,” 7 remained standing. All along Euclid Ave., many of the substantial houses that remained were converted to rooming houses or for institutional uses. Used car lots opened in front of more than one mansion, while demolished homes were sometimes replaced by multistory apartment buildings. From the late 19th century until the 1950s, most of Cleveland’s AFRICAN AMERICANS had been concentrated in the CENTRAL neighborhood just south of Euclid Ave. In the 1950s, displacement from urban renewal and continuing migration from southern states caused the HOUGH neighborhood to the north of Euclid Ave. to transition rapidly to a majority-black district. Some churches on Euclid Ave., notably CALVARY PRESBYTERIAN CHURCH, became racially integrated in these years. However, as African Americans began to frequent businesses along Euclid Ave., a number of racial attacks, including bombings, struck various establishments near Doan’s Corners.

Starting in the late 19th century, a cultural and educational district developed east of Doan’s Corners. The institutions that later merged to become CASE WESTERN RESERVE UNIVERSITY led the way in the 1880s. Their presence caused the nearby streetcar turnaround on Euclid Ave. to be dubbed UNIVERSITY CIRCLE, a name that soon encompassed the surrounding area. More institutions followed, notably the CLEVELAND MUSEUM OF ART (1916) and the future UNIVERSITY HOSPITALS CASE MEDICAL CENTER (1925). West of Doan’s Corners, the CLEVELAND CLINIC FOUNDATION opened at E. 93rd St. in 1921. In later years, especially after the 1950s, University Circle and the Cleveland Clinic experienced accelerating expansion. Following a brief interlude in which African American entrepreneur Winston E. Willis operated a vibrant though controversial entertainment strip in the block between E. 105th and E. 107th Sts., the so-called second downtown fell to the wrecking ball in the 1970s-80s. By the early 21st century, UNIVERSITY CIRCLE, INC. (UCI) and its constituent institutions worked to recreate a retail district, resulting in the Uptown retail and residential complex, located to the east of Ford Dr. between the new homes of the CLEVELAND INSTITUTE OF ART and the MUSEUM OF CONTEMPORARY ART CLEVELAND (MOCA). The combined Circle-Clinic area employed more than 40,000 people, second only to the roughly 100,000 who worked Downtown. To the west in Downtown, CLEVELAND STATE UNIVERSITY (1964) embarked on its own significant campus expansion.

Most of Euclid Ave. suffered disinvestment between the 1960s and 1990s. As shopping centers siphoned business to the suburbs, the Downtown section of the street lost all of its department stores between 1962 and 1993. As Fortune 500 company headquarters departed, the hope that office buildings might re-enliven Downtown faded. By the 1990s Playhouse Square, following its nationally significant restoration program, was one of the few bright spots along this part of Euclid Ave. The span between Cleveland State and Cleveland Clinic fared even worse amid growing vacancy and demolition. The construction of the Healthline bus rapid transit corridor, completed in 2009, promised to remake Euclid Ave. from Public Square to EAST CLEVELAND. Billions of dollars of commercial and institutional investment transformed much of the street. By 2019, new apartment towers and hotels dotted Euclid Ave. from Downtown to University Circle. Major commitments by CLEVELAND CHILDREN’S MUSEUM, University Hospitals, and CLEVELAND FOUNDATION added to the revitalization of Euclid Ave. between the INNERBELT FREEWAY and E. 79th St., known as MidTown. However, to date, little redevelopment has occurred in East Cleveland, Ohio’s poorest municipality. 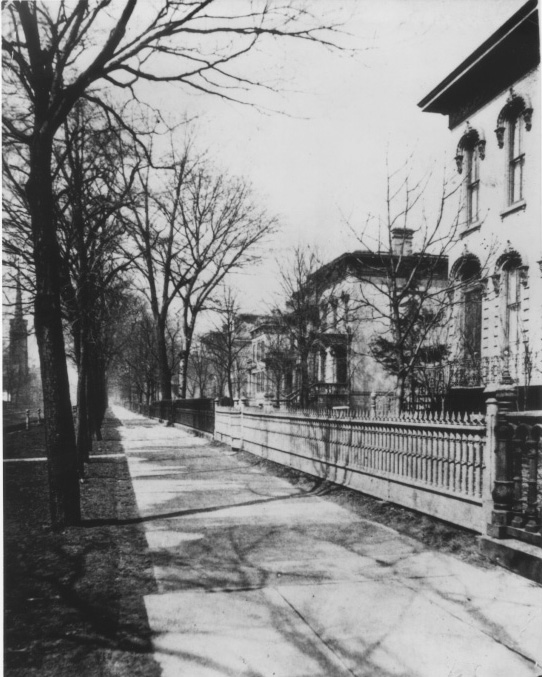