PUBLIC SQUARE marks the center of the City of Cleveland. The "Original Plan of the Town and Village of Cleaveland," prepared in 1796 by the CONNECTICUT LAND CO., called for a 9.5-acre public square bisected by 2 wide streets, Superior and Ontario. It was conceived as the open space of a traditional New England town plan, intended to serve as a common grazing area and meeting place. Public Square In 1857 Superior and Ontario streets were truncated at Public Square, and a white double-railed fence enclosed the grounds, which were landscaped (see FENCE WAR OF PUBLIC SQUARE). In 1861 city council passed an ordinance changing the name of Public Square to "Monumental Park" in recognition of the memorial to Commodore Perry unveiled there (see PERRY MONUMENT), but "Public Square" continued in popular use. Ontario and Superior were reopened to traffic through the Square in 1867. Public Square was the site of the first successful demonstration of electric streetlights on 29 Apr. 1879 (see CHAS. F. BRUSH). In the late 19th century, 2 memorials were erected that were still prominent features of the Square in 1993: a statue of MOSES CLEAVELAND unveiled by the EARLY SETTLERS ASSN. in 1888, and the Cuyahoga County's SOLDIERS & SAILORS MONUMENT, dedicated on 4 July 1894. The TOM L. JOHNSON monument joined them in 1916. Over the next several decades, the Square grew shabby and neglected, functioning more as a transit hub than a public park. In 1976 the Downtown Cleveland Corp. and the City of Cleveland, with grants from local foundations and the Garden Ctr. of Greater Cleveland, commissioned Sasaki Associates of Watertown, MA, and Cleveland architects M. Hisaka & Associates to prepare a redevelopment plan for Public Square. Construction, funded by the city, Cuyahoga County, and the State of Ohio, was completed in 1986. 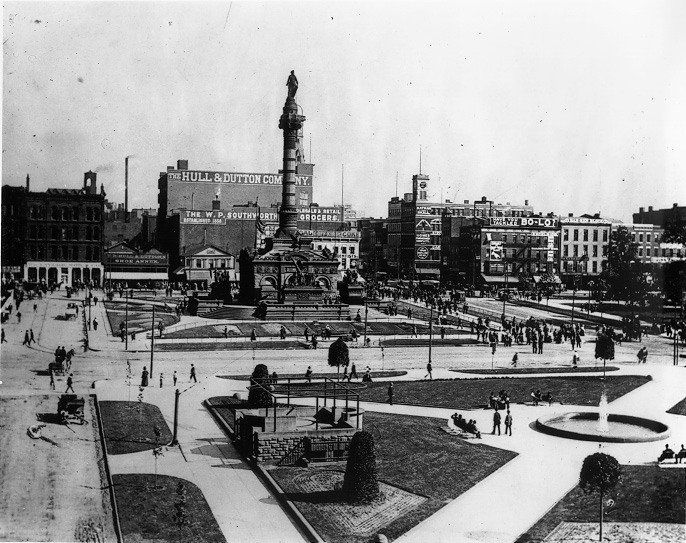 The Soldiers and Sailor’s monument as seen from the northeast quadrant of Public Square, ca. 1895. WRHS.