EVANS, FRED "AHMED" (1931-27 Feb. 1978) was convicted on seven counts of first-degree murder for his role in the GLENVILLE SHOOTOUT. Evans was born in Greenville, SC to John and Ora Evans. The Evans family moved to Cleveland in 1948, seeking a better life. Often ridiculed by his classmates, he dropped out of Rawlings Junior High School to take a series of odd jobs before enlisting in the Army in 1948.

Evans was sent to Korea where he served with distinction as a combat engineer. He suffered back, shoulder, and head injuries from a bridge collapse while there. He was honorably discharged in 1952 and returned to Cleveland to work as a bus driver. As a result of his injuries, Evans complained of headaches, loss of vision, paralysis and periodic blackouts. He reenlisted in the Army in 1954. By this point his behavior had changed; he was court martialed after striking an officer. Army doctors diagnosed Evans with “psychomotor epilepsy” and a “paranoid-type personality.” They also described his behavior as “hostile” when under duress. Evans claimed it was during one of these blackouts that he had assaulted the officer. He served 7 months of a two-year sentence and was dishonorably discharged.

In 1955 Evans returned to Cleveland after his release from military confinement at Fort Crowder, MO. He took a job working for the Pennsylvania Railroad for the next decade. By the early 1960s, Evans became fixated on the paranormal and the supernatural; he even claimed to have seen an unidentified flying object over E. 79th St. and Kinsman Ave. Evans became a disciple of an astrologer named Emmett Cobb, who was later institutionalized at the Lima State Hospital for the Criminally Insane.

Evans became politically active after hearing Malcolm X deliver his “ballot or bullet” speech at CORY METHODIST CHURCH in April 1964. In subsequent years, he began wearing Afrocentric clothing. Although much of the city’s civil rights leadership brushed him off as an eccentric, Evans became one of Cleveland’s foremost Black nationalists in GLENVILLE with his New Libyans, the other being Harllel Jones and his Afro Set in HOUGH. Evans countenanced the use of violence as retribution for white oppression, which in the context of the place and time proved an attractive message to his followers.

Growing racial tensions on the city’s East Side culminated in the HOUGH RIOTS of July 1966. After the chaos of Hough, political leaders, the media, law enforcement, and Evans himself predicted that 1967 would bring even more racial turmoil. However, as Detroit and Newark saw severe rioting, Cleveland emerged from the so-called “long, hot summer” unscathed. Dr. Martin Luther King Jr. had repeatedly visited Cleveland during the year, partly to promote the mayoral campaign of CARL B. STOKES who gave the city’s Black community a chance for representation. Evans reluctantly agreed to assist in “get out the vote” efforts and to himself vote for Stokes in November 1967. However, King’s assassination five months later convinced him that only revolution could bring about real change. Around this time, Evans adopted the first name “Ahmed” and opened the Afro Culture Shop and Bookstore at 11105 Superior Avenue. A gathering space for the city’s burgeoning Black Nationalist community, Afro Culture was targeted by the CLEVELAND POLICE for sanitary violations on three different occasions. Evans received $6,000 in grants through Mayor Stokes’ CLEVELAND: NOW! program to renovate a new storefront for Afro Set and to develop youth programs, but unbeknownst to Stokes, Evans also used Cleveland: NOW! money to purchase rifles and ammunition.

A series of evictions that Evans and his New Libyans suffered in the spring of 1968 provided tinder for the violence that subsequently ensued. The final straw was an eviction notice for an apartment house on Auburndale Ave. in Glenville where Evans and some of his followers lived. FBI informants passed along a questionable tip that Evans’ Black Nationalists of New Libya, on the morning of the eviction on 24 July, were planning an attack against several establishment African American political figures including Mayor Stokes.

On 23 July, police set up surveillance near Evans’ apartment. Evans he had been repeatedly harassed by police, he was being evicted from his apartment, and now he was being surveilled. For Evans, already a man with a history of paranoia and bitterness, events came to a head. The accounts of who fired first vary, but what is certain is that Evans and his men engaged in a bloody shootout with police that raged for an hour leaving seven dead and 15 wounded.  Four days of rioting in Glenville followed.

Evans turned himself in to police on 24 July. On 11 September 1968, he pled not guilty to seven charges of first-degree murder. On 12 May 1969, Evans was convicted by an all-white jury on all seven counts and sentenced to death. The death sentence was commuted to life in prison in 1972 after the Furman v. Georgia case ruled that death sentences were unconstitutional. Evans died of cancer in prison on 25 February 1978. 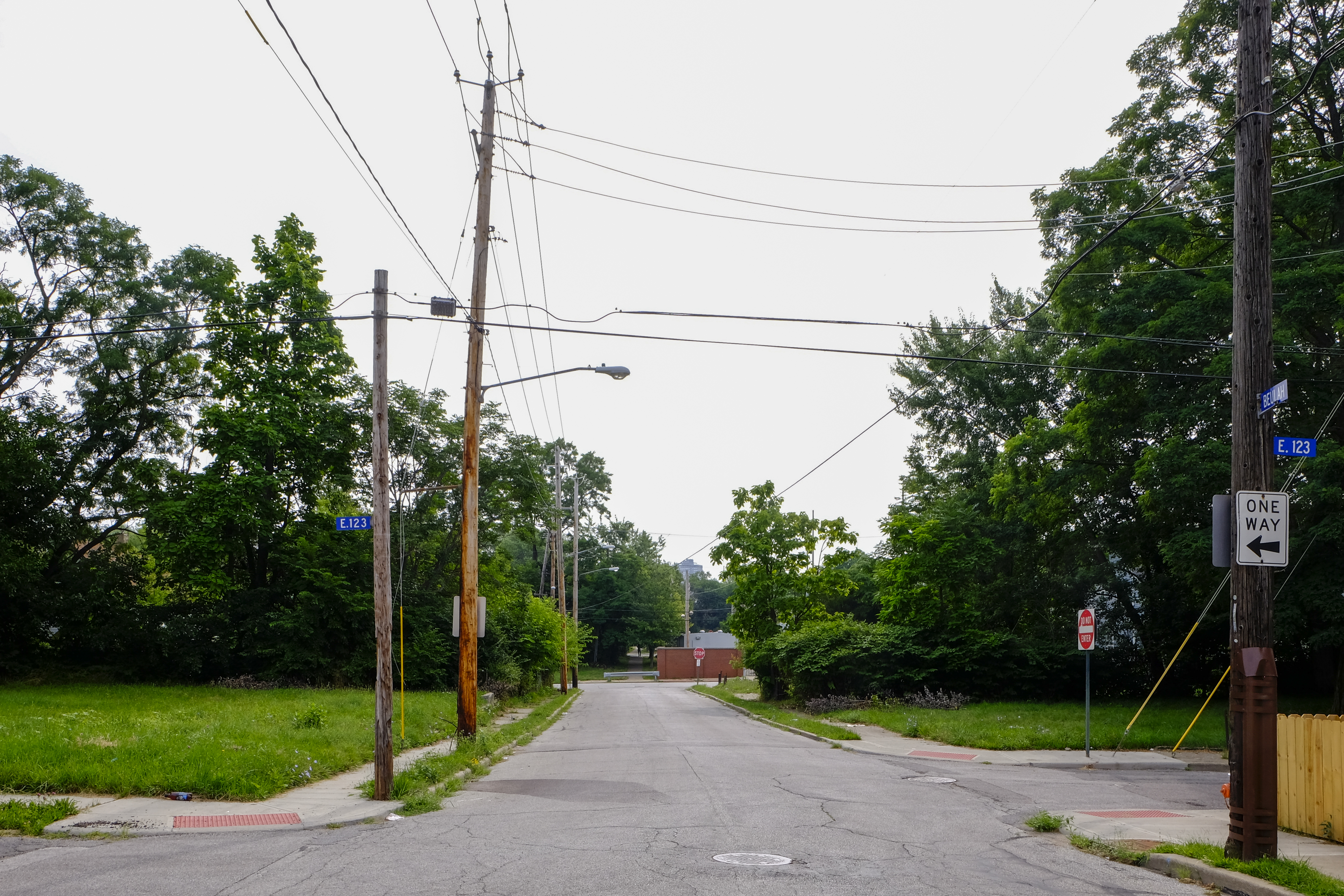 Matthew Chasney
Site of the Glenville Shootout from the intersection of E. 123rd and Beulah looking east toward Lakeview Avenue, 2018.