The GLENVILLE SHOOTOUT (23 July 1968) was a gun battle between the CLEVELAND POLICE and an armed black militant group called the Black Nationalists of New Libya, led by FRED "AHMED" EVANS. The incident resulted in casualties on both sides; three policemen were shot dead at the scene with scores more injured, some dying years later from their injuries. Three nationalists were killed and others may have perished in a house that police set ablaze as a putative sniper's nest; no one searched for remains when the home was bulldozed several days later. A bystander was also killed. The versions of what happened that evening are disputed; the police say they were ambushed while Evans insisted it was the police who shot first. What is now certain is that the incident stemmed from a larger national surveillance effort organized by the FBI known by the code name COINTELPRO.

Cleveland Police were already monitoring Evans following tips that he and his group had stockpiled weapons. However, after questionable intelligence from FBI informants within the New Libyan group about an attack they were allegedly planning, on 23 July police conspicuously parked cars outside the Auburndale Ave. apartment house where the group lived. Evans had a turbulent history with the police and the surveillance pushed him into a heightened state of paranoia, convincing him that a police assault was imminent. Unrelated to the surveillance operation, a city tow truck was dispatched to the area to remove an abandoned vehicle from Beulah Avenue between E. 123rd St. and Lakeview Rd., and at 8:20 PM was fired on by Evans' New Libyans, who wounded the driver William McMillan. McMillan claimed that a man with a shotgun was the first to shoot, followed by a volley from snipers hiding in some nearby bushes, one of whom McMillan claimed was Evans. Evans recounted it differently, that he was around the corner walking to the Lakeview Tavern when he heard a single shot and saw McMillan running toward him, followed by machine gun fire which killed one of his associates, Amir Iber Katir. Evans' testimony that the first victim was a Black nationalist comports with the Cleveland Police's version of events. The shootout lasted for about an hour; in total, there were 22 casualties including the seven confirmed deaths. Evans participated in the early skirmishes but then hid in the attic of a home on Lakeview Road, a block from the Auburndale apartment house. He claimed his gun had jammed but others dispute his account. Upon surrendering Evans told the trio of arresting officers, "If my carbine hadn't jammed I would have killed you three."

The police claims that they were ambushed could be questioned due to the fact that the precipitating incident with the abandoned car was unrelated. However, the militants may have mistaken tow truck operator McMillan for a police officer due to the color of his uniform, and one of Evans' followers later testified that Evans had instructed them to take up arms and kill police. Following a high-profile trial, Evans was convicted on seven counts of first-degree murder on 12 May 1969 and sentenced to death by electrocution, a sentence that was commuted to life in 1972. The shootout precipitated four days of rioting in the surrounding GLENVILLE neighborhood, causing some $2.6 million in property damage to area businesses. Mayor CARL STOKES called in the Natl. Guard as backup to restore order, and on the first day following the shootout attempted to pacify the area using a community-based effort led largely by Black nationalists, a decision that quickly proved controversial. Only African American police officers were initially allowed to patrol, a move intended to reduce tensions but which soured Stokes' relationship with the police department and stymied his efforts to reform it. The shootout also served to discredit the mayor's ambitious CLEVELAND: NOW! redevelopment program after newspaper reports that Evans had received grants through the program, using some of the funding to purchase arms. 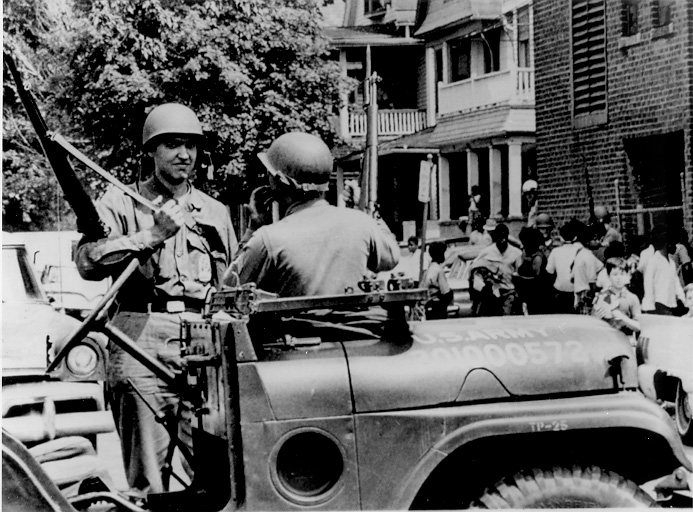