The HANNA THEATER has served as the mecca of legitimate THEATER in Cleveland for roughly a century, providing Clevelanders with a source of quality theatrical entertainment rivaling Broadway. Located in the Hanna Bldg. at E. 14th St. and Euclid Ave., the theater opened on 29 Mar. 1921. It was built by DAN R. HANNA, who dedicated it to the memory of his father, Sen. MARCUS A. HANNA, a theater lover and former owner of the EUCLID AVE. OPERA HOUSE. The Hanna Theater, Building, and Annex were constructed of Indiana limestone, designed by Chas. A. E. Platt, built by JOHN GILL & SONS, and decorated by Faustino Sampietro. Both exterior and interior were based on classic traditional architectural design.

The first production at the 1,535-seat theater was a presentation of The Prince and the Pauper. In ensuing years, it hosted a number of major touring Broadway shows and an occasional pre-Broadway tryout, notably the world premiere of Maxwell Anderson's High Tor on 30 Dec. 1936. Weathering the Great Depression, it became the only "road theater" in the country that had been in operation for 50 or more consecutive years. Milton Krantz became general manager of the Hanna in 1941, known as "Mr. First-Nighter" for his tradition of walking up the aisles and shaking hands with people he knew. After 42 years and 1,000 first nights, Krantz retired in 1983. Owned by the T. W. Grogan Co. since 1958, the Hanna was eclipsed in the 1980s by the revitalization of PLAYHOUSE SQUARE. It went dark in 1989. 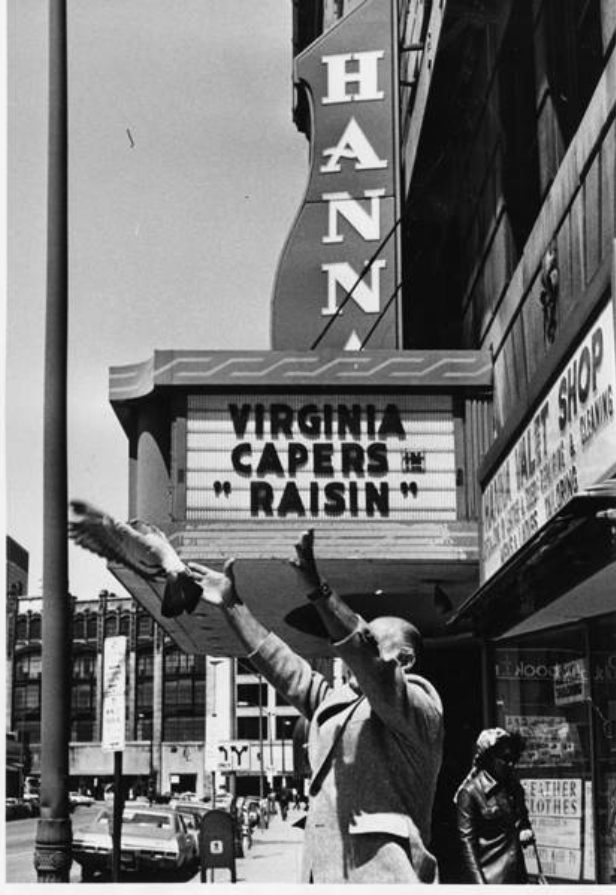 Cleveland Memory
Built in 1921, the Hanna Theater was a cornerstone of the Cleveland theater scene. In this photograph, general manager Milton Krantz, releases a homing pigeon in front of the theater on May 6, 1976. The pigeon took thirty minutes to reach its roost in North Olmsted. Krantz was know as "Mr. First Nighter."

A renovation effort spearheaded by T. W. Grogan Co. and Majestic Urban Revivals, Inc., was initiated in late 1993. Led by Ray K. Shepardson, a founder and former executive director of the Playhouse Square Assn., a $2 million restoration of the facility converted the theater into a multi-tiered, cabaret-style showplace. In 1999, the Hanna Theater and Annex, along with several surrounding properties, were sold to the Playhouse Square Foundation. The Hanna was fully restored in 2008 and reopened as the new home of GREAT LAKES THEATER FESTIVAL.

Vacha, John.  From Broadway to Cleveland:  A History of the Hanna Theater.  Kent State University Press, 2007