HOLY NAME HIGH SCHOOL opened in September 1914 as part of the Holy Name Church at 8328 Broadway Avenue in Cleveland, Ohio. Holy Name was one of the first coeducational, private, Catholic schools in Cleveland.

The school and parish are affiliated with the Roman Catholic Diocese of Cleveland. The crest of Holy Name utilizes the Greek letters Chi (X) and Rho (P), the first two letters of Jesus Christ’s name. The letters sit upon a wave and are encased by the school’s name and founding date.

Holy Name High School adopted “The school’s the thing” as their official motto in 1926, when it first appeared in the school paper.

John “Jack” T. Hearns composed the Alma Mater on May 13,1937. Hearns was the winner of John Phillip Sousa’s Silver Cup in 1929 as director of the PARMADALE band. In 1931, Hearns was hired as the band director for JOHN CARROLL UNIVERSITY. Hearns also wrote the Alma Mater for SAINT IGNATIUS HIGH SCHOOL, and was known colloquially as the Music Man of Cleveland.

Holy Name High School celebrated its centennial in 2014 and its doors remain open for enrollment. 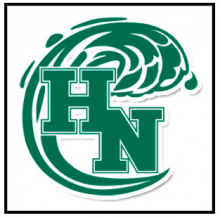 The school symbol of Holy Name was adopted in the 1920s when the school’s football team gained notoriety for their athletic achievement. The green wave represents the calculated plays the team used on the field to overwhelm opponents and secure victory. The green wave also pays homage to Holy Name’s predominantly Irish roots. This symbol is the athletic mascot of Holy Name.

Holy Name is a member of the North Coast League, an athletic conference for 12 Catholic high schools in the greater Cleveland area.

Holy Name High School is a member of the ONE HUNDRED YEAR CLUB OF THE WESTERN RESERVE.