The HOPE MEMORIAL BRIDGE, originally the Lorain-Carnegie Bridge, opened in 1932. The second of the major high-level spans that cross the CUYAHOGA RIVER in downtown Cleveland, it was preceded by the DETROIT-SUPERIOR BRIDGE in 1918. Citizens presented CLEVELAND CITY COUNCIL with a petition requesting construction of a viaduct from Lorain to Huron Road in 1902. A high-level crossing linking Lorain and Central avenues had been envisioned as early as 1911. In 1925 a special committee of the City Plan Commission recommended that a Central-Lorain Bridge should be built immediately, and an $8 million bond issue was approved in 1927. The realignment of the streets resulted in the connection of Lorain with Carnegie instead of Central. The new steel-and-concrete structure, nearly a mile long, consisted of 13 cantilever truss spans varying in length from 299' over the river to 132' at the ends. A lower deck, intended to carry 4 lanes of vehicular traffic and 2 streetcar tracks, was never completed. The bridge was designed by engineers WILBUR J. WATSON & Associates, with FRANK WALKER as consulting architect. One of the variations from strict engineering necessity was the curving of the lower edge of the trusses to give a more pleasing arched appearance, and the major architectural feature was the 4 massive stone pylons with 8 conventionalized figures representing Guardians of Traffic.2 Designed by Walker and sculpted by Henry Hering, they are transitional between a stylized classicism and the Modernistic or Art Deco style. The bridge was closed in 1980-83 for the replacement of the concrete roadway deck. Upon reopening, it was renamed the Hope Memorial Bridge, in honor of the father of entertainer BOB HOPE, who was a Cleveland stonemason. 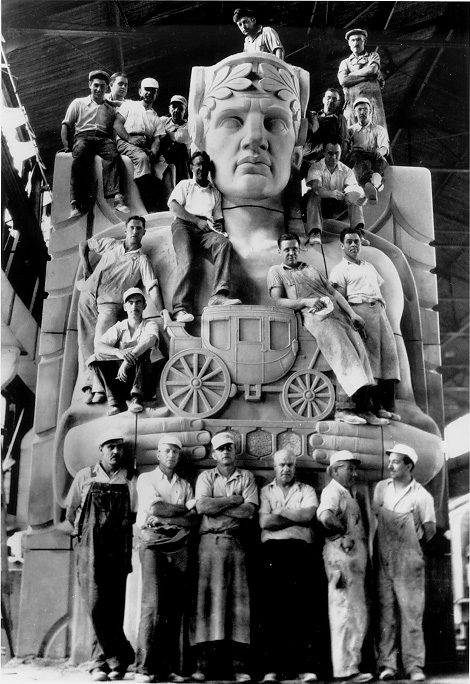 Article Categories
Transportation
Architecture
Related Links
1 Late News Column on the Lorain-Carnegie Bridge, 1932. via Cleveland Memory
2 Although sometimes called the "Guardians of Transportation," the figures were originally referred to as the Guardians of Traffic. See pg. 114 in Eric Johannesen's  A Cleveland Legacy: The Architecture of Walker and Weeks.