PRIDE IN CLEVELAND has been celebrated by the city’s LGBTQ community since the early 1970s. The gay community in Cleveland in the 1970s was connected to the larger gay liberation movement growing in the United States, which was propelled by the Stonewall Riot in New York City in 1969. Pride celebrations began to occur annually in cities across the U.S. in 1970 to commemorate the gay, lesbian, and transgender people who resisted their continued harassment and discrimination by the police at Stonewall. Cleveland’s gay community in the 1970s organized itself in order to do the same.

Over the years, many different organizations have sponsored and coordinated the Pride celebrations, leading to years in which a lack of coordination led to multiple separate events, as well as years in which there were no Pride events in the city at all. After the early years of Pride in Cleveland in the 1970s sponsored by numerous organizations, gay community members and organizers in Cleveland elected to join the larger Pride celebrations in Columbus, Ohio through the 1980s. This continued until 1989, when Cleveland Pride began organizing annual Pride events in downtown Cleveland and continued to do so until 2016 when the organization abruptly canceled the events. The cancellation led to the organization of Pride in the CLE by the LESBIAN/GAY COMMUNITY SERVICE CENTER OF GREATER CLEVELAND which organized celebrations in 2016 and 2017 before the organizations reunited in 2018. Since then, Cleveland’s LGBTQ community has had to adapt to conditions during the COVID-19 pandemic to find new ways to continue its annual Pride events.

Due to low attendance of early events, limited media coverage, and competing claims, it is difficult to say with complete certainty when the first Pride events in Cleveland took place. The gay community publication HIGH GEAR claimed that the first Gay Pride March in Cleveland took place in July 1972 with 70 attendees. However, the student newspaper at CASE WESTERN RESERVE UNIVERSITY, The Observer, claimed that the Gay Pride March that took place on September 15, 1973 was the first event of its kind in Cleveland. The accounts of these events describe the same sponsorship and route for the march, making it possible that the 1972 date was an error in the HIGH GEAR account, as the article was not published at the time of the event, but it is also possible that there were events in both years which is suggested by the differing attendance described for each event.

While it is not possible to say for certain whether it was the first year of Pride in Cleveland, there were certainly Pride events in 1973. On September 15, the Gay Activists Alliance sponsored a Gay Pride March that began outside of a gay bar called “The Change” and moved along Euclid Avenue to a rally in Public Square. Organizers were disappointed by the turnout of the event. There was a hope that around two-hundred people would be in attendance, but only forty attended the march, which organizers attributed to fear by many in the gay community that they would be recognized and ostracized. The Pride events in 1973 took place over Gay Pride Weekend. In addition to the march, there was a concert on Friday, a dance on Saturday night, and a picnic on Sunday. 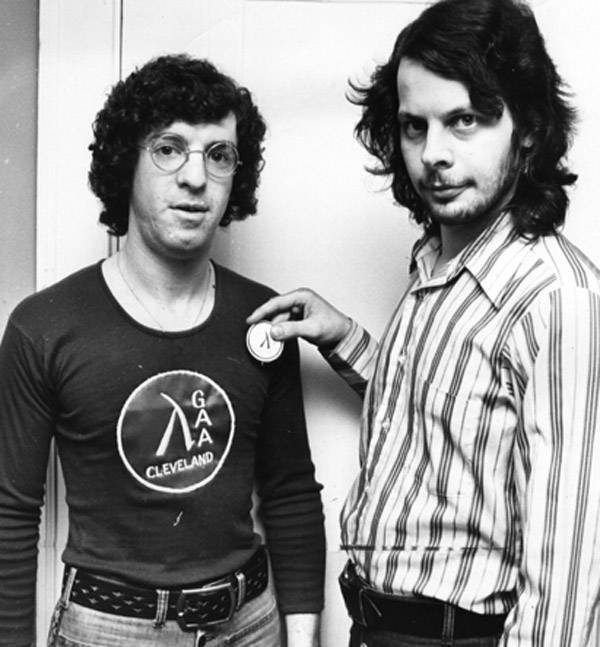 After the 1973 Gay Pride Weekend, the next documented Gay Pride event appears to have occurred in 1975. On June 22, GEAR (THE GAY EDUCATION AWARENESS AND RESOURCES FOUNDATION) sponsored a Gay Pride Picnic at EDGEWATER PARK that had an attendance of around 100 people.

In 1976, the sponsorship of the year’s Gay Pride events shifted again. In July, Dan Richmond, the worship coordinator of the Cleveland Metropolitan Church, led a Gay Pride March from Gypsy’s Restaurant at 2418 St. Clair to EDGEWATER PARK, where a picnic was held. The attendance that year was recorded as being over fifty people.

In 1977, Cleveland held two Gay Pride Marches. The Cleveland Gay Political Union and the Gay Caucus of the Youth Against War and Fascism originally planned a March on June 25, but the organizers failed to secure a street permit in time. The event had already been advertised extensively, leading the organizers to decide to go through with the march even though it meant that the 225 attendees would have to walk down the sidewalks on Euclid Avenue rather than the street. On July 9, there was a second March sponsored by the Cleveland Metropolitan Community Church with a smaller turnout.

Annual Pride events in Cleveland continued in 1978 when GEAR sponsored what appears to have been the fifth annual Gay Pride March in Cleveland on June 25. However, between 1979 and 1989, Pride events for Cleveland’s gay community appear to have moved out of the city and into statewide events.

In 1983, members of Cleveland’s gay community elected to join the Ohio Gay Pride Parade on Sunday, June 26 in Columbus, Ohio. A total of 31 gay organizations endorsed, supported, or participated in the event, including Cleveland’s GEAR Foundation, the Case Western Reserve Gay Student Union, and STONEWALL CLEVELAND.

From 1985 to 1987, organizations and members of Cleveland’s gay community continued to celebrate Pride in Columbus with the Midwest Gay Pride Parade. In 1985, the Columbus celebration had around 3,000 people in attendance who marched 1.5 miles to the Ohio Statehouse steps where activists called on the crowd to be proud and fight for equality. In 1987, the LESBIAN/GAY COMMUNITY SERVICE CENTER OF GREATER CLEVELAND worked with organizers in Columbus to advertise the Midwest Gay Pride Parade on June 21 to the Cleveland community.

Pride events in Cleveland became more regular in 1989 when Cleveland Pride began organizing annual celebrations. The first event, “Lesbian and Gay Pride ‘89: An Out of the Closet Experience,” took place on a block of West 29th Street where musical groups and booths selling food, ice cream, shirts, books, and balloons were set up. The AIDS epidemic shaped the event in significant ways as organizers sought to bring the gay community together during a time of significant loss and to promote safer sex. That year, there was no Gay Pride March, the attendance of several hundred people led organizers to plan a march for Pride in 1990, which continued for the next 25 years.

While Cleveland Pride was a place for celebration and community gathering, it also served as a forum for demands for the rights of gay, lesbian, and bisexual people. In 1991, STONEWALL CLEVELAND put together a list of five demands for Pride that year, which included funding to fight AIDS rather than war, full civil rights for lesbians, gays, and bisexuals, ending racism within and outside the gay, lesbian, and bisexual community, keeping abortion safe and legal, and finally, the right to live openly without harassment and violence.

Groups within Cleveland’s LGBTQ community have also organized separate events to gather and celebrate amongst themselves in addition to the wider annual Pride celebrations. In 1997, the first official Black Gay Pride in Cleveland took place, although there were informal events in years prior. The Black Gay Pride events took place from August 15 to August 17. The community continued to organize annual Pride events in the years following. In 2016, Black Gay Pride took place from Thursday, June 23 to Saturday, June 26. The events included the “Rooftop Kick Off Party” on Thursday night, “The Big Bang” celebration on Friday night, the Gay Gala at the Masonic Auditorium Saturday afternoon, and the Gay Gala afterparty Saturday night. Promoting safe sex was a point of importance at all of these events. The organization  Safe on the Scene was present for the celebrations and provided information and resources concerning sexual health and sexually transmitted diseases.

Between 1989 and 2016, Cleveland Pride was the organizer for the main Pride celebrations. However, in 2016, it abruptly announced that it had canceled the Pride celebration due to “changes in the social climate.” That year, Pride in the CLE made its debut as the LESBIAN/GAY COMMUNITY SERVICE CENTER OF GREATER CLEVELAND stepped in to organize the annual Pride celebrations. On August 13, the same day that Cleveland Pride was supposed to have taken place, Pride in the CLE began with a march from the DETROIT-SUPERIOR BRIDGE to PUBLIC SQUARE where festivities continued until 6 PM, complete with live music and entertainers. The LESBIAN/GAY COMMUNITY SERVICE CENTER OF GREATER CLEVELAND was the main sponsor for the event, but planning it took the efforts of a total of eighteen organizations, as well as funding from the CLEVELAND FOUNDATION and the AIDS Funding Collaborative.

Following the abrupt changes to Pride in Cleveland in 2016, Cleveland again had two Pride celebrations in 2017. Pride in the CLE began on Monday, May 29 and continued in a weeklong celebration until June 4. The second annual march by Pride in the CLE took place on Saturday, June 3. Cleveland Pride returned after its 2016 cancellation with a march, rally, and festival on June 24. Participants marched from West 3rd Street and St. Clair Avenue to Voinovich Bicentennial Park where there were performances by dozens of musicians and entertainers.

In 2018, Pride in the CLE and Cleveland Pride united to organize one event managed by the LESBIAN/GAY COMMUNITY SERVICE CENTER OF GREATER CLEVELAND. Thousands of people were in attendance for the march into Public Square and the festival that followed. In 2019, Pride in the CLE continued as events began on Saturday, June 1 with a march followed by a festival in Public Square.

In 2020, Pride events had to be adapted in the context of the COVID-19 pandemic and concerns for the health of participants. That year, organizers of Pride in the CLE organized a Pride Ride on September 12  as an alternative to the march in order to allow social distancing. Over 300 members of Cleveland’s LGBTQ community decorated their cars and drove through Cleveland’s Gordon Square Arts District. Pride in the CLE also organized a virtual Pride event with appearances by artists and community leaders that was streamed by over 8,000 people. In 2021, Pride in the CLE continued with the altered Pride celebrations as the COVID-19 pandemic continued. On June 4, there was a televised Pride in the CLE event broadcast by WKYC (CHANNEL 3). On June 5, participants gathered in their vehicles decorated for Pride at Edgewater Park and rode through the EDGEWATER NEIGHBORSHOOD and DETROIT-SHOREWAY neighborhood.

From 1973 to 2021, Pride in Cleveland was organized and sponsored by numerous organizations representing the city’s LGBTQ community. Cleveland’s gay community successfully organized Pride events and marches in the early 1970s, contributing to the broader gay liberation movement taking place in the United States at the time. In the 1980s, members of Cleveland’s gay community used their connections with other gay activist groups in Ohio and worked together to organize large demonstrations for Gay Pride in Columbus. Beginning in 1989, Cleveland Pride became a consistent annual tradition. Although Cleveland Pride abruptly canceled the annual Pride March in 2016, the LESBIAN/GAY COMMUNITY SERVICE CENTER OF GREATER CLEVELAND stepped in to ensure that there would be an annual event by beginning Pride in the CLE, which has continued annually since then and merged with Cleveland Pride under one event. Even in the face of the COVID-19 pandemic, Cleveland’s LGBTQ organizations and community were able to find new ways to continue holding Pride events while protecting the health of those involved.