RUTHENBERG, CHARLES (9 July 1882-3 Mar. 1927), prominent in the Cleveland Socialist and, later, Communist parties, was born in the CUDELL neighborhood of Cleveland to German immigrants August and Wilhelmenia (Lau) Ruthenberg. He was educated at DYKE COLLEGE, and worked as a salesman and bookkeeper for the Cleveland office of Selmer Hess Publishing Co. of New York. In 1904, he married Rosaline Nickel and they had one son, Daniel, the following year.  Originally interested in becoming a Lutheran minister, Ruthenberg was soon drawn to politics. He first considered himself a Progressive, backing Cleveland Mayor TOM L. JOHNSON. However, after reading Karl Marx's Das Kapital, he became drawn to the Socialists and by 1912 was a committed party member. As leader of LOCAL CLEVELAND (the Socialist Party branch in the city), Ruthenberg was an effective organizer and perennial political candidate. He ran for mayor four times (1911, 1915, 1917, 1919); for Ohio governor in 1912; for the U.S. Senate in 1914; and for the U.S. House of Representatives in 1916 and 1918. In the Cleveland mayoral election of 1917, Ruthenberg won close to 30% of the vote.  In that same year, he was arrested for his opposition to America’s entry into WORLD WAR I.  He spent a year in prison, during which time he was tortured, an experience that left him a hardened and radicalized man. 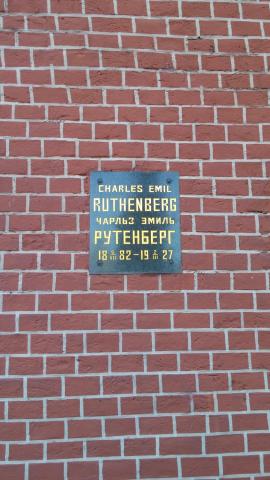 Ruthenberg's last major political action in Cleveland was leading the May Day Parade of 1919 which resulted in the MAY DAY RIOTS and his arrest on a charge of assault with intent to kill.  The charge was dismissed and, after his release, Ruthenberg became one of the founders of the Communist Party USA in Chicago in September 1919.  He subsequently spent the greater part of the 1920s in and out of jail for his political activities, until he suddenly died in 1927 of a ruptured appendix.  His body was cremated in Chicago, and his ashes sent to Moscow and interred at the Kremlin Wall. He was only one of three Americans given such a distinction by the SOVIET UNION, the other two being radical journalist John Reed (best known for his Ten Days That Shook the World) and “Big” Bill Haywood, co-founder of the INDUSTRIAL WORKERS OF THE WORLD (IWW).