The MAY DAY RIOTS occurred in Cleveland on 1 May (May Day) 1919 and marked a major episode of unrest that characterized the rising tensions in American society at the time of the First Red Scare, in the wake of the 1917 Bolshevik Revolution in RUSSIA. The clashes involved Socialists, the INDUSTRIAL WORKERS OF THE WORLD (IWW), trade-union members, police, and military troops. The disturbances in Cleveland occurred alongside May Day clashes in other major American cities, such as New York and Boston. However, it was Cleveland that experienced the worst and most violent unrest.

The events of May Day 1919 came only months after the Seattle General Strike of February 1919 and just days after bombs were mailed to several prominent American public figures by the followers of Italian anarchist Luigi Galleani. As an industrial center with close to one million people and a large blue-collar foreign-born population of 30%, Cleveland was fertile ground for labor activism. Its preeminent radical was CHARLES RUTHENBERG, a Socialist activist born to German immigrant parents in Cleveland’s CUDELL neighborhood. Arrested for opposing American involvement in World War I, Ruthenberg sought to hold a mass demonstration on Cleveland’s PUBLIC SQUARE on May 1, the International Workers’ Day. The aim was to protest the jailing of Socialist Eugene V. Debs and to voice opposition to the American intervention in Russia’s Civil War on the side of the Whites against the Reds. At the time, socialism was on the ascendancy in Cleveland. In 1917, that fateful year of the Bolshevik Revolution, Ruthenberg ran for mayor on the Socialist ticket and won nearly 30% of the vote.  However, Cleveland was ultimately a city dominated by established political machines. The Cleveland Socialists had no easy way to gain power, a circumstance that made LOCAL CLEVELAND much more radical than other branches of the Socialist Party in the Great Lakes region. 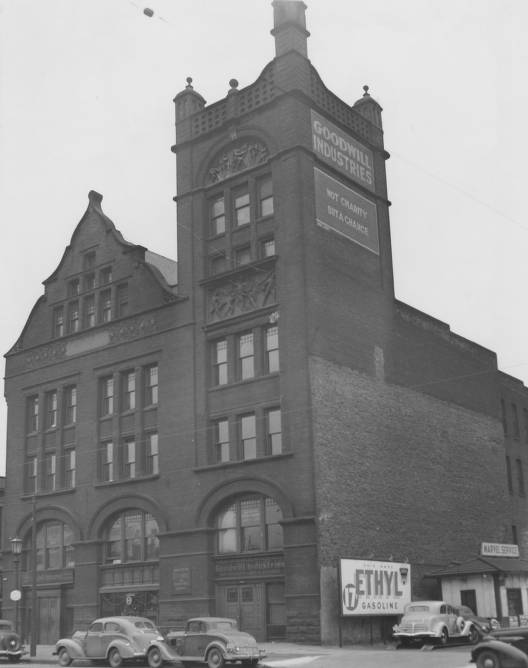 Cleveland Public Library Digital Gallery
Germania Hall in 1940, then used as the Goodwill Industries headquarters. The building, designed by Cudell and Richardson and built in 1887, was demolished circa 1954.

The events of May Day 1919 commenced when the procession of 30,000 marched from the Socialist headquarters at Acme Hall (later GERMANIA HALL) on Prospect Ave. and toward Public Square. They were divided into four units, each with a red flag and an American flag at its head; many marchers also wore red clothing or red badges. The group consisted of the Socialists, the IWW, and the American Federation of Labor (AFL). Many were immigrants, particularly from Southern and Eastern Europe, including HUNGARIANS, JEWS, RUSSIANS, POLES, ITALIANS, SLOVAKS, and CZECHS.  Even more critically, the procession also included veterans from World War I, dressed in full uniform. The riots began when an anti-socialist veteran attempted to take the red flag of a marching pro-socialist veteran. The subsequent clashes pitted the socialist marchers against a group of self-styled “patriots” opposed to socialism, dubbed “loyalists” by THE CLEVELAND PRESS. The city used mounted police, army trucks, and even a battle tank from the Western Front to restore order. Two people died, many were injured, and 124 were arrested by Cleveland Police, including Ruthenberg. Significantly, none of those on the “loyalist” side were arrested by police. The Socialist Party’s headquarters at Acme Hall were ransacked by a mob of 100 men. Cleveland’s major newspapers attacked the foreign-born participants of the rally as “foreign agitators,” even though they were naturalized citizens, and demanded their deportation. Such nativist xenophobia would foreshadow the Immigration Acts of 1921 and 1924, which restricted immigration of “undesirable” Southern and Eastern Europeans to the US (see: IMMIGRATION AND MIGRATION).

The May Day Riots were followed by several other disturbances across the country, including, most tragically, the Wall Street bombing of 1920. However, as America entered the Roaring 20s, the First Red Scare gradually receded from public consciousness. Clevelanders danced the Charleston to HOT JAZZ amid a seemingly prosperous future, and many preferred to move beyond the violent tumult that shook Public Square in May 1919. Still, the May Day Riots remain significant not simply as an event, but as evidence of a longer, too often forgotten history of what some might term radicalism in Greater Cleveland. It is a history that warrants our attention as it often challenges the accepted historical narrative of the city.