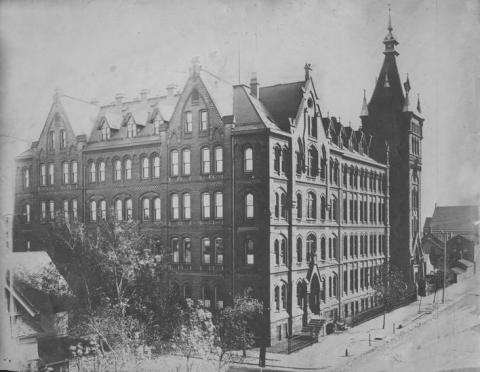 SAINT IGNATIUS HIGH SCHOOL is a private Jesuit boys high school located in the OHIO CITY neighborhood of Cleveland, Ohio. Saint Ignatius is a Roman Catholic institution which operates under the Diocese of Cleveland. In the early 19th century, public schools in Cleveland were generally hostile to Catholicism, and there were few alternatives. The Diocese of Cleveland was formed in 1847, and spurred a large influx of parishes and parish schools, due in large part to the work of Bishop LOUIS AMADEUS RAPPE. Within this movement, a large push for greater access to a Catholic education came from Bishop RICHARD GILMOUR in the 1870s. Alongside Father Michael Zeoller, Gilmour worked to bring a Jesuit school for boys to a central location in Cleveland.

Gilmour invited Father Henry Behren, the Jesuit Superior of Buffalo, New York, to Cleveland to establish this new school. Saint Ignatius was officially founded on September 6, 1886, and opened as a modest two story structure on West 30th street. The building at first housed both a college and high school program, and was the 20th secondary school sponsored by the Jesuits in the United States.

The Jesuits who founded Saint Ignatius College were exiles from Germany who had been forced out by Otto von Bismarck’s Kultukampf, which clamped down on Roman Catholic institutions with state control. The high school and university programs soon overcrowded the facilities due to increasing enrollment, and little opportunity for growth and development seemed possible. In 1923, the college separated, purchasing property in University Heights. The new university settled on a name to honor the first Catholic Bishop in the United States - John Carroll.

Saint Ignatius High School has enjoyed significant expansions and renovations since its inception. A five-story classroom wing, completed in 1891 and designed by Jesuit architect Brother Frederick Wipfler, is modeled after parochial schools in Germany and Denmark. The building was designated as a Cleveland historical landmark in 1974. The high school campus today has been expanded to encompass 23 acres and 19 buildings, with new additions like the Saint Mary of the Assumption Chapel in 1998 and the sprawling O’Donnell Athletic Complex in 2001.

The academic mission statement of Saint Ignatius is focused mainly on college readiness, aiming to create “a challenging curriculum, master teachers, and an emphasis on clear thinking and communication skills.” Spiritual programs also play a central role in the experience, including a four year theology program featuring annual retreats and abundant service opportunities. The school’s motto, “Men for Others”, emphasizes the numerous community service programs, such as the Student Community Involvement Program and the Arrupe Neighborhood Partnership Program. Academics are supplemented by a robust sports program, with 16 varsity sports teams which have accrued 46 state championships and 11 state titles since 1988.

Under Principal Anthony Fior, Saint Ignatius High School’s 2020 student enrollment is 1,514. The school’s administration, the Board of Regents, governs separately from the Jesuits.