The UNION CLUB OF CLEVELAND, located at E. 12th St. and Euclid Ave., is a private organization composed of many of the city's industrialists, businessmen, and professional citizens. One of the oldest social organizations in Cleveland, it was incorporated on 25 Sept. 1872 as the Union Club of Cleveland. A group of 81 men who had originally belonged to the Cleveland Club formed the new group for the purpose of having a place "for reading, for discussing the topics of the day, for entertaining and for promoting physical training and education." The founders included WM. J. BOARDMAN, Chas. A. Brayton, Chas. B. Pettengill, HENRY B. PAYNE, Wm. H. Waite, Lucien Hills, Waldemar Otis, WM. BINGHAM, SAMUEL MATHER, Harvey H. Brown, GUSTAV C. E. WEBER, Geo. Westlake, AMOS TOWNSEND, and Geo. E. Armstrong. The club has counted a large number of famous citizens among its members, including five presidents: Grant, Hayes, GARFIELD, McKinley, and Taft.

The club purchased the home of GEO. B. SENTER near E. 6th St. and Euclid Ave. for its headquarters. In 1882, ladies were given their own dining room and lounge within the club, but were not permitted to become members. Membership increased rapidly throughout the late nineteenth century, and as numbers swelled to more than 500, a new building became necessary. On 25 June 1901, the club was incorporated for profit; it became the Union Club Co. and subsequently purchased the Castle property at E. 12th St. and Euclid Ave. A clubhouse, designed by Cleveland architect CHAS. F. SCHWEINFURTH, was dedicated on 6 Dec. 1905 to accommodate the increased membership (700-1,000) and remains the club's home. A dedication ball was held on 6 Dec. 1905. On 23 May 1961, the Union Club Co. amended its 1901 articles of incorporation, becoming an Ohio corporation not for profit. 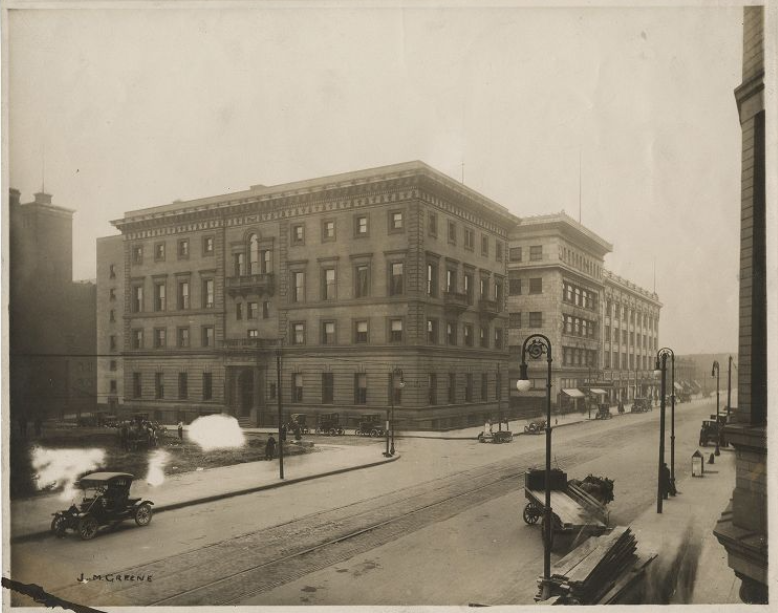 In 1983, Karen Horn, the first female president of the Cleveland Federal Reserve, became the first woman member with full privileges. This literally opened the front door for other women to follow - they had not been permitted to use the front entrance before Horn's admittance. Mary Lynn Laughlin became the first woman President of the Union Club in May of 2007. Eight years later, on 28 May 2015, Randy McShepard was name the first African American President of the Club. The gender disparity among club members changed dramatically on 1 Apr. 2019, as the Union Club admitted members of the INTOWN CLUB, raising the percentage of women members up to 33%. As of 2021, the club president is Paul L. Rupert.