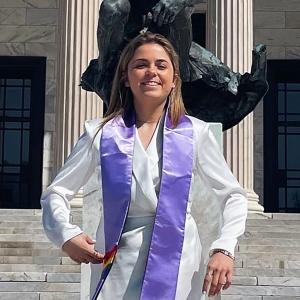 Basketball initially attracted Washington, D.C., native Emily Todd to Case Western Reserve University—and it was through the sport that she met her new teammates who ultimately inspired her career path off the court.

With a strong interest in the medical field, Todd initially considered careers in nutrition, sports medicine or physical therapy, but that was before hearing the positive experiences several of her teammates were having at Frances Payne Bolton School of Nursing.

“I think the biggest thing that drew me was hearing how fulfilled they felt by their course work and their clinical rotations and the fact that they were able to balance that with being a varsity athlete. It seemed like the best of both worlds,” said Todd.

Todd pivoted to nursing during the second semester of her first year and quickly realized she made the right decision. Mentors from the team also encouraged her to experience all a college experience offers—in the gym, in the classroom and beyond.

“I feel like my time at CWRU taught me a lot about balance. It’s a really great academic institution, and it can be really easy to be so hyper-focused on academics and sort of lose these other very important parts of life and college in general,” she said. “I really do credit my teammates, and being part of the basketball team, for showing me what true balance looks like.”

Todd is moving to New York City this summer and plans to practice oncology nursing. She eventually wants to study to become a nurse practitioner. Todd said she is grateful to friends, classmates, teachers and coaches who grounded her during her Case Western Reserve journey.