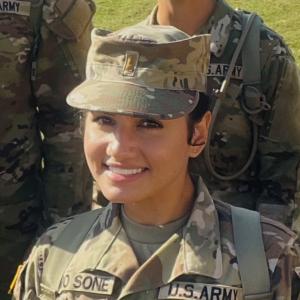 Andrea Ciuro Sone’s road to dentistry has not been easy. A week after Hurricane Maria devastated Puerto Rico—which she calls home—in 2017, Ciuro Sone was invited to interview for the Doctor of Medicine in Dentistry program at Case Western Reserve University School of Dental Medicine. In addition to the stress of preparing for her meeting, Ciuro Sone was also navigating the aftermath of a natural disaster that upended life at home.

“We had no power, no water. My family was safe but there was severe destruction on the island and emotionally I was very affected,” she said. “I barely made it to Cleveland. I spent 18 hours stuck in an airport trying to make it to the interview.”

Four years later, after relocating with her mother and brother to Ohio, Ciuro Sone is embarking on her final year as a DMD student and balancing that commitment with serving as a lieutenant in the U.S. Army Dental Corps. Through the Health Professions Scholarship Program, Ciuro Sone participates in summer training focused on teaching young soldiers to become officers. During her most recent training, she was in charge of leading a platoon of more than 130 lieutenants.

“The traits I’ve gained from the military mix well with dentistry—developing physical endurance, discipline, respect, and psychological maturity to be receptive and empathetic,” said Ciuro Sone. 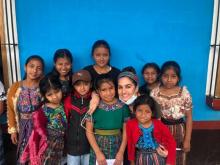 Her interest in dentistry was first piqued when she decided to shadow in a dentistry office while pursuing an undergraduate degree in biomedicine from the University of Puerto Rico. This experience prompted her to participate in the Summer Medical and Dental Education Program at Case Western Reserve.

"I've encountered a lot of people who have suffered from health disparities or not having the perfect smile, and they are emotionally impacted,” said Ciuro Sone. “Dentistry gives me the chance to fix those issues to give them a better quality of life.”

After her expected graduation in May, Ciuro Sone plans to continue her military career as a dentist in the Army, with an interest in specializing in periodontics.

“I feel prepared to start working,” she said. “I feel that my hands are ready. I have the training that I can combine with my military skills to be a successful dentist.”