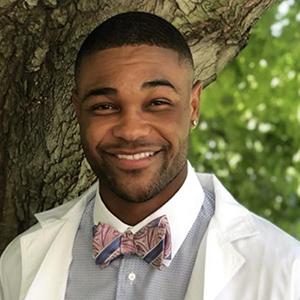 Sometimes life allows for second chances. For third-year Doctor of Dental Medicine student Ty Hearns, that is a mantra he lives by—understanding how granting second, or even third or fourth, chances can change lives.

During his first two years of undergraduate study at William Jewell College in Liberty, Missouri, Hearns was playing football with hopes to one day play in the NFL. After a series of injuries, including a torn MCL, and academic struggles, he lost his scholarship and dropped out of college.

While that might have been the end of the academic road for some, Hearns wasn’t deterred. After moving home and working in landscaping, his mentor, an oral surgeon, eventually inspired him to pursue a career in medicine.

With the unwavering support of his father and grandfather, Hearns decided to go back to school at Southeast Missouri State University to finish his undergraduate degree. He then moved to Cleveland to attend Case Western Reserve University School of Dental Medicine.

Building on his own experiences, Hearns’ passion not only lies in supporting his community through oral health care and education, but also in mentoring disadvantaged youth.

“If people had given up on me when I was 14 or 15 years old, I definitely wouldn’t be here,” he said. “My heart goes out to people who have had a short stick in life, who haven’t had that figure to look up to or those opportunities. I want to be able to give that to people who specifically missed out on those through life.”

Now, Hearns is involved in the Student National Dental Association and Business in Dentistry Club, and plans to continue his community outreach beyond his academic career. After dental school, he hopes to pursue a residency program, with an interest in orthodontics, and eventually run his own practice.