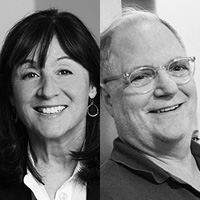 Trailblazing investigative journalist Jane Mayer is Chief Washington Correspondent for The New Yorker, where she covers politics, culture, national security and the #MeToo movement. Previously, she worked at the Wall Street Journal, where she covered the bombing of the U.S. Marine barracks in Beirut, the Gulf War, and the fall of the Berlin Wall. In 1984, she became the WSJ’s first female White House correspondent. She is the author of the acclaimed best-seller Dark Money: The Hidden History of the Billionaires Behind the Rise of the Radical Right which was published to acclaim in 2016.

Award-winning journalist Frank Rich writes on politics and culture for New York Magazine, where he is Writer-at-Large. Since 2008, Rich has been a creative consultant at HBO. He is the executive producer of Veep, the long-running Emmy and Peabody Award-winning comedy starring Julia Louis-Dreyfus.