This report represents a unique analysis of the $6 billion HOPE VI program that was the largest and longest running program transforming distressed public housing into mixed-income housing. The report relies on performance measurement data that HOPE VI grantees report to HUD. Those performance measurement data summarize activities of HOPE VI grantees, with particular emphasis on demolition and production of housing units, and also supportive services provided to residents. We analyzed those performance measurement data to create an overall assessment of the HOPE VI program. The report reinforces many well-understood aspects of the HOPE VI program: that it resulted in a net loss of public housing units; that a low proportion of baseline residents returned to completed developments; but that the program produced new units of different types, including other forms of affordable housing, market rate housing, and both rental and homeownership units. Research on HOPE VI trailed off substantially after 2004, so this report is perhaps the most comprehensive accounting of the program’s outputs.

State of the Field Scans

The federal Choice Neighborhoods Initiative (CNI) builds upon the HOPE VI program with an expanded focus on the neighborhoods surrounding the public housing redevelopment sites, and a strategic focus on issues such as education and workforce development. The evaluation, led by the Urban Institute, includes baseline data collection and process evaluation for the first five implementation sites in Chicago, New Orleans, Boston, San Francisco and Seattle. In addition to describing baseline conditions in the neighborhoods receiving implementation grants, the evaluation describes the revitalization efforts and documents the early outcomes in those neighborhoods. NIMC is a part of the Urban Institute’s evaluation team.

Cascade Village is a mixed-income community in Akron, Ohio redeveloped and managed by The Community Builders (TCB). TCB is one of the country’s leading developers and managers of affordable housing, particularly known for a mixed-income approach to public housing transformation.  In 2010, TCB received a three-year grant from the Knight Foundation to support the implementation of the Community Life model at Cascade Village: “a reinvention of family and community support services grounded in the authentic engagement of residents.”  TCB believes that redeveloped mixed-income housing is not an end in itself, but a platform for other positive changes in families and communities. Since 2011, NIMC has been conducting a learning and evaluation study of the implementation of the Community Life initiative. The study uses a mixed-methods approach to document and evaluate the progress of the initiative as well as assess the early results of the model on resident well-being and resident engagement.

HOPE SF is an innovative initiative to transform San Francisco’s isolated public housing developments into thriving communities of opportunity. The public-private initiative is the first citywide public housing revitalization project to establish a principle-driven framework to guide redevelopment, including seeking to maximize the rate of return for public housing residents. The initiative has four goals: 1) build superior housing, 2) enhance the lives of existing residents 3) serve as a catalyst for improving the surrounding neighborhood and 4) advance knowledge in the field nationally about best practices in public housing revitalization and community development. NIMC is serving as a national advisor to the local evaluation working with the San Francisco-based firm Learning For Action.

“Building Mixed-Income Communities: Documenting the Experience in Chicago–Early Lessons at Roosevelt Square,” was a short-term study of Roosevelt Square, a mixed-income development on the west side of Chicago transformed from ABLA Homes. The Roosevelt Square development team received program-related investment (PRI) and grant funding from the Ford Foundation to implement an innovative developer-fee investment strategy that would support community building and resident services in the new mixed-income development.  The University of Chicago School of Social Service Administration and Case Western Reserve University received funding for an 18-month research study to examine this effort.  The study had two primary purposes: 1) to investigate the community-building strategies implemented to create a well-functioning community within and around Roosevelt Square and 2) to understand the perspectives and experiences of residents who moved into the mixed-income development and the ways in which living in this community was affecting their lives. Data was collected from focus groups, in-depth interviews, and field observations conducted between January 2010 and June 2011 at Roosevelt Square.

This research project is an investigation into possibilities and challenges faced by development teams in transforming public housing into mixed-income development communities.

Jazz on the Boulevard Case Study

This research project is a long-term case study of Jazz on the Boulevard, one of the first planned mixed-income developments being created as part of the CHA ‘s 1999 Plan for Transformation. In-depth, qualitative interviews of residents, service providers and developers, and a comparison group of individuals describe what motivated residents to choose to live in a mixed-income development, their perception of the neighborhood ‘s role in their lives, how the development effects social capital, networks, and social organizations, and what roles various members of the community play.

The Federal Department of Housing and Urban Development selected the Chicago Housing Authority (CHA) as one of the three sites nationally to implement a mentoring demonstration program. The goal of this program is to test a means of providing additional support for public housing residents who have been relocated as part of a HOPE VI redevelopment by partnering residents with mentors who are recruited through faith-based and community-based organizations. This study seeks to determine the effectiveness of the program, explore experiences of participants, and the perspectives of mentors and staff members of participating institutions. 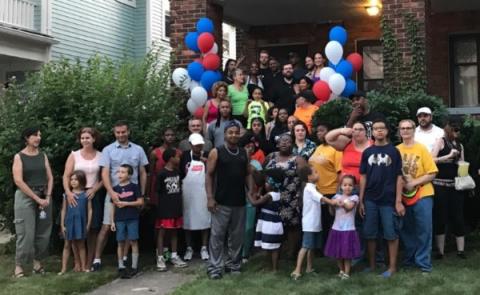 In 2012 the Cuyahoga Metropolitan Housing Authority (CMHA) received a Choice Neighborhoods Initiative planning grant for the Central neighborhood in Cleveland. NIMC joined the planning team to advise the mixed-income strategy in preparation for the implementation proposal.  By engaging local stakeholders, reviewing available data, and drawing on information from other mixed-income developments around the country, NIMC is helping the team develop a vision and strategies for attracting and sustaining a successful mix of incomes in the development and the broader neighborhood.

Urban Strategies, the resident services and community building affiliate of McCormack Baron Salazar works in mixed-income developments across the country including two Choice Neighborhoods implementation sites.  NIMC has worked with Urban Strategies to assess and advise its data management practices.  Ultimately the goal is to be able to undertake analyses of resident services and outcomes to improve practice and generate evidence about the value and impact of support services.