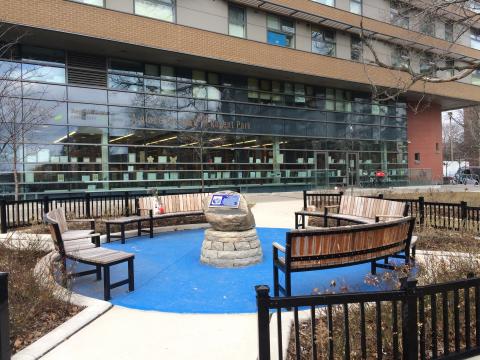 In one of our roles as a central resource for research and information on mixed-income developments and communities, the National Initiative on Mixed-Income Communities conducts periodic scans of the mixed-income field on specific topics of pressing interest.

Nearly thirty years of mixed-income policy and practice across the United States and Canada has established that mixed-income redevelopment can dramatically enhance the quality of life for low-income families through improved housing quality, neighborhood conditions and safety. However, while there has been promising recent research about outcomes for children who move out of high-poverty communities, we do not yet have strong evidence about the social, educational or economic mobility outcomes for youth who live in redeveloped mixed-income communities – the very population many believe should be the greatest beneficiaries of place-based mixed-income interventions. This State of the Field Scan seeks to inform mixed-income policy and practice by sharing the strategies and lessons learned from five mixed-income redevelopment efforts that have implemented promising youth development strategies. Download State of the Field Scan #3. 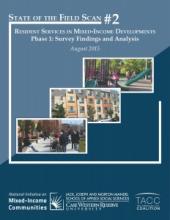 The mixed-income approach has successfully transformed deteriorating public housing complexes into safer and more attractive developments for residents from a range of income levels. However, the emerging literature on mixed-income development suggests that improvements in social and economic well-being for low-income families are far more difficult to achieve. This current scan of the field provides an initial picture of how mixed-income developments across the U.S. are providing services to improve residents’ well-being and self-sufficiency. Online surveys were completed by representatives of 60 mixed-income developments on the demographics and characteristics of their site, the types of support and social services that are available for residents, the scope of efforts to track and assess service use and outcomes, and perceived outcomes of these services. Forty-seven of the sixty sites reported that they provide some level of resident services. Download State of the Field Scan #2 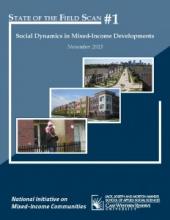 A first of its kind look at mixed-income developments across the U.S. and Canada. This scan of 31 mixed-income developments provides information on a variety of approaches to mixed-income design and varying perspectives on the issue of social dynamics. Despite the wide range of levels of “income mix” across sites, we learned of some shared issues and challenges across sites in terms of promoting and sustaining strong social relations among the mix of residents. While there is consensus among respondents that managing social relations is a critical component of the long-term success of mixed-income developments, most do not feel that they yet have the full strategies or resources to be most effective. Those sites that benefit from a planned site design that facilitates various forms of interaction, dedicated efforts to program and manage communal facilities and public space, and active mechanisms for engaging residents in community building, seem to hold more promise of sustained effective neighboring. Most respondents shared a positive outlook on the relative stability of their development but agreed that generating stronger and less divisive relations across the various lines of difference among residents will require more creative and strategic attention to managing social dynamics. Read State of the Field Scan #1

These research briefs were produced as a part of the Mixed-Income Development Study in collaboration with the University of Chicago School of Social Service Administration.

The Enduring Significance of Race in Mixed-Income Communities

(2014) Mixed-income developments, like those being built as part of the Chicago Housing Authority’s Plan for Transformation, are part of a policy effort that seeks to deconcentrate poverty by demolishing public housing sites and attracting higher-income residents to live alongside former public housing residents in the redeveloped communities. The primary focus of these efforts has been on economic integration, with little attention paid to the issue of racial integration despite a public housing population in Chicago and many other U.S. cities that is predominantly African American. In this brief, we examine how race remains relevant to the everyday lives and experiences of residents in three mixed-income communities in Chicago—Oakwood Shores, Park Boulevard, and Westhaven Park. Based on interviews and focus groups with residents and professional stakeholders, we find that concerns about “ghetto culture” continue to inform in the attitudes of many higher-income, non-black homeowners and development professionals in these contexts. The relative privilege and power these groups have to establish and enforce norms, policies, and rules leads to challenging interracial dynamics at the developments. We also find complex interracial dynamics at play in these communities. Relocated public housing residents and other low-income black renters experience targeting and marginalization from black, as well as non-black, neighbors. Download The Enduring Significance of Race in Mixed-Income Communities

Youth in Mixed-Income Communities Mixed-income development has been embraced by policymakers across the United States as a response to urban poverty and the problems of traditional public housing. Several of the theories that drive the rationale for mixed-income development are directly concerned with children and youth. Relocation to mixed-income communities is meant to have a beneficial effect on young people by removing them from negative influences, providing a safer and healthier environment, and better connecting them to positive social contexts and resources from which they were isolated in public housing. Neighborhood influence is difficult to untangle, however, and it requires focusing not just on the ways in which neighborhoods may affect youth, but also on the ways in which young people shape and have an impact on their local environments. In this brief, we explore the role of and responses to youth in three mixed-income communities in Chicago—Oakwood Shores, Park Boulevard, and Westhaven Park—built on the footprint of large public housing complexes as part of the Chicago Housing Authority’s (CHA) Plan for Transformation. We draw on the perspectives of residents and development professionals expressed in interviews, focus groups, and through field observation, although we were not able to speak with youth directly. We examine both expectations about youth in mixed-income developments and perceptions of how young people contribute to social dynamics and interaction in these contexts. We also explore the nature of their engagement in community organizations and activities and their role in shaping community concerns about and responses to crime, safety, and social control. We find that there have been improvements in the lives of young people who have been able to move into these new developments in terms of living in safer, more orderly communities. However, their overall experiences are not altogether positive for them and are proving to be problematic for the broader community. Access Unexpected Challenges

Participation and Decision-Making in Mixed-Income Developments: Who Has a Say? (2013)

A major policy focus over the past two decades has been support for housing policies designed to deconcentrate poverty, remake public housing, and promote the development of mixed-income communities in place of the most deteriorated and problematic public housing developments. Part of the argument for these policies concerns the promise of inclusion and the benefits that should accrue to low-income, relocated public housing residents by integrating them into safe, well-functioning, and better connected neighborhoods. This brief focuses on one aspect of inclusion: low-income residents’ participation in the deliberative and decision-making processes that shape the nature of community life in mixed-income developments (for example, with regard to design, amenities, eligibility requirements, service provision, resource allocation, norms of behavior, and rules). Download the full brief

Why Do So Few Residents Return to Mixed-Income Developments? Insights into Resident Decision-Making? (2012)

In this brief, we explore the factors that influenced relocated public housing residents' decisions to return or not return to a mixed-income development. Through interviews with relocated public housing residents of three mixed-income developments in Chicago- Jazz on the Boulevard, Oakwood Shores, and Westhaven Park- as well as a group of residents who chose not to return, we find that the following issues significantly influenced resident decision-making:

Chicago's Public Housing Transformation: What Happened to the Residents? (2012)

Twelve years after the start of the Chicago Housing Authority's Plan for Transformation, more than 16,000 families have been relocated into a variety of housing contexts with the stated goals of reducing concentrated poverty, revitalizing neighborhoods, and improving well-being, but questions remain about what has happened to the residents. Where did families end up? Are different types of households moving to different housing contexts? Does family well-being differ based on housing type? This brief explores these issues.

This brief focuses in particular on the challenges raised in negotiating the uses and expectations of space in three mixed-income developments that are a part of Chicago's Plan for Transformation. We explore residents' perspectives on crime, safety, and disorder in the three developments, the kinds of behavioral expectations and cultural assumptions that lie behind these perspectives, and the ways in which formal rules, enforcement, and perceptions of fairness impact dynamics around these issues. Download Social Challenges in MI

The Nature of Social Interaction in Mixed-Income Developments (2011)

This brief focuses on early social relations in two mixed-income developments, Oakwood Shores and Westhaven Park, that are part of the City of Chicago's "Plan for Transformation." We investigate how different residents--relocated public housing residents, two affordable and market-rate renters, and affordable and market-rate owners-- describe and assess their social interactions with their neighbors. We first discuss three main types of interaction among residents:

We then explore how these interactions compare to where residents used to live. Finally, we analyze barriers and challenges to interaction. Read The Nature of Social Interaction in Mixed-Income Developments

Living in a Mixed-Income Development: Resident Perceptions of Benefits and Disadvantages (2010)

Jazz on the Boulevard Case Study

This research project is a long-term case study of Jazz on the Boulevard, one of the first planned mixed-income developments being created as part of the CHA 's 1999 Plan for Transformation. In-depth, qualitative interviews of residents, service providers and developers, and a comparison group of individuals describe what motivated residents to choose to live in a mixed-income development, their perception of the neighborhood 's role in their lives, how the development effects social capital, networks, and social organizations, and what roles various members of the community play.