This past fall, the Office for Sustainability conducted a transportation survey in an effort to better understand how the CWRU community gets to and from campus. More than 1000 faculty, staff, post-docs, graduate students, and undergraduates responded. Thank you! 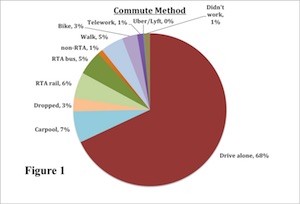 ‌Faculty and staff get to CWRU using a variety of transportation modalities (Figure 1). The majority of commuters drive alone in their cars (68%). Some employees carpool (6.6%), and approximately 10% use public transit (5% RTA bus and 5% RTA rail). Due to the urban location of the CWRU campus, some commuters choose to walk (5%) and bike (3%). 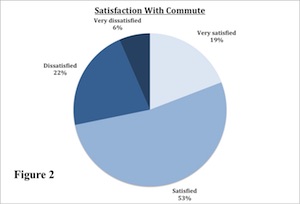 Interestingly, when asked what would impact one’s decision to change their method of commuting, top responses cited cost (16%), travel time (14%), availability of transit (13%), the reliability of transit (10%), and commuter benefits (9%). We then asked, "if these conditions were improved, by what methods would you commute?” Interestingly, respondents claimed they would use RTA bus (15%), carpool (15%), RTA rail (14%) and telework (14%).

Although at present a significant majority of faculty and staff commute by driving alone, the data suggest that improvements to travel time, cost, and availability of transit could encourage people to use RTA and carpool instead of driving alone. Clearly, there is interest in having a more green commute.

We should note that the above results are preliminary. Our office is developing a final CWRU Transportation Report, which will be posted on our website. Stay tuned for the next newsletter, where we will reveal how and why students get to and from campus.