Brian Gray on the Garden@Case 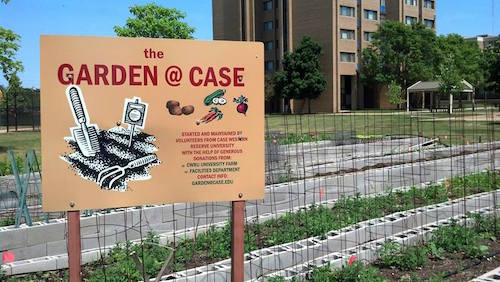 CWRU’s campus community garden, Garden@Case, is surrounded by donated concrete blocks beside the bleachers for the softball fields beside Leutner Commons. Brian Gray, Librarian at the Kelvin Smith Library, heads up organizing the garden and gave us the scoop on what’s growing this summer. The garden is full of tomato plants, onions, green and purple cabbage, collard greens, a variety of peppers and - new this summer! - strawberries.

The majority of the produce is donated to the Cory Hunger Center. Volunteers may also take some produce in exchange for their time.

Weeds and other garden waste is composted on site. There are no chemicals used in the garden and so all produce is considered organic although not certified organic.
Additional compost is supplied each year from CWRU’s Facilities Services to feed the soil. Donations of plants and seeds come from the Ohio State Extension Summer Sprouts program and the University Farm. “Everything is donated from the water to to the plants,” Brian tells us.

The Garden@Case started with co-chairs Kathleen Dowdell and Chris Thornton who have both moved on from CWRU. Brian started volunteering with many other KSL co-workers and became the leader after Kathleen retired last year.

The garden has been in existence since 2011 but in 2013 moved from across the street from the coffee shop to its current location. Brian tells us that the Music Settlement has a garden nearby with blueberry bushes and flowers. Many people get them confused because they are so near to each other. So if you see lots of blooms, head toward the softball fields.

Brian says that he’s been a gardener his entire life. He loves that the Garden@Case not only feeds hungry people fresh, organic produce but also acts as a model for our campus community on how a veggie garden can work. He has seen many people grow in their gardening confidence as volunteers. Brian’s home plot is a “salsa garden” with tomatoes, cilantro, and peppers and he also has some raspberry bushes.

Volunteer opportunities are aplenty in the garden. Weeding and harvesting can be more of a time sink but volunteers are also needed for a few minutes on weekends and breaks to turn on soaker hoses. Brian says that many people just volunteer once while others offer their time weekly. “There’s something to do every season of the year,” he says.

To get involved, check out the Facebook group or the CWRU website and sign up on the volunteering page‌. Brian updates the page regularly with photos.