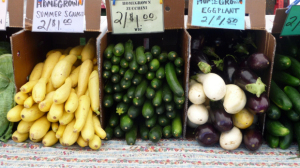 Foodie, (n.): A person who enjoys eating food, unlike everyone else, who hates food, thinks it's disgusting, and would never consider eating it (definition courtesy of Urban Dictionary).

Okay, so we all like food, and need to eat food–it's a fact of life! But, we should also remember that not all foods are created equal. Aside from taste, some foods can be more socially responsible and sustainable than others. At Case Western Reserve University, Bon Appétit, CWRU’s third party food service vendor, sets a stellar example for producing and consuming sustainable foods and we foodies could learn a thing (or three) from them:

Bon Appétit does its absolute best to support local food producers. Not only does this benefit the local economy, but it also fosters a stronger sense of community here at CWRU. Bon Appétit works directly with farmers to ensure that the food we eat is both delicious and as socially responsible as possible. In addition to efforts to support local farmers, Bon Appétit has also taken actions to use meats with less antibiotics, switching to rBGH-free milk, and using eggs from cage-free hens. Bon Appétit referencesMargaret Mead in saying, "Never doubt that a small group of thoughtful, committed citizens can change the world; indeed, it is the only thing that ever has." Perhaps we, as foodies, could also be more strict with where we spend our money: supporting local farmers (buying out of state entails a direct increase in CO2 output due to transportation), and ethically grown produce.

Case Western Reserve University is very much like a city within a city. Our complex logistical systems mean one thing: we need to control our waste. Here at CWRU, the food scraps from that are produced during food prep from all our kitchens, are composted at the University Farm. Additionally, the food pulper in Tink turns some food preparation waste and turns it into, a slurry that is easier to compost at the Farm. These local green waste endeavors are all part of Bon Appetit's larger national sustainability efforts. These involve kitchen staff education, food recovery, and
composting programs, Bon Appétit makes sure that food waste at Case Western Reserve University is minimized as much as possible. Along with this list is the Food Waste Reduction Program: a Low-Carbon Diet program that led to a 30% decrease in waste production in Bon Appétit Cafés nationwide through 2009. Bon Appétit has even vowed to have 80% of its accounts to be Food Recovery Certified by 2018! Similarly, we, as the community of CWRU, can reduce the waste we produce from eating by going tray-less, bringing our own mugs/containers for beverages, and using real silverware rather than plastic when given the option. Bon Appétit's commitment to waste reduction can be tied to a larger movement involving the Real Food Challenge. 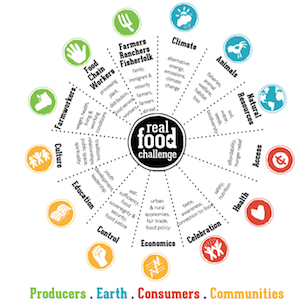 Ultimately, Bon Appétit is a pioneering organization in sustainable food and addressing climate change; however, we shouldn't leave all the work up to them! Let's try to follow suit with the previous three items, and consume responsibly. Now get out there and enjoy some great food, fellow foodies!