Graphene Has Some Great Sustainability Applications

Graphene is an infinitely tileable sheet of carbon that is just one atom thick and has great intentional to have a big impact in sustainability applications. Due to its exceptional properties and the widespread availability of carbon, graphene has become a popular candidate for research in the field of synthetic materials. Not only is graphene 200 times stronger than steel at 1/6th the weight, its hyper­thin molecular structure makes it flexible and almost entirely transparent (97.3%). Its electron mobility is considerably higher than silicon, the current standard for modern circuitry, allowing electrons to travel almost 1000 kilometers per second, 30 times faster than silicon while still maintaining its flexibility.  and it also conducts heat 10 times better than copper. 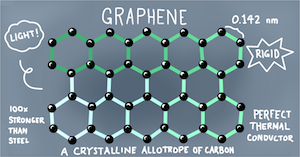 Graphene has a vast number of potential applications, in fields ranging from medicine to computing. It could be used to make lighter, more energy efficient cars, trains, and aircraft, and to make better LCDs and LEDs, and even touchscreens, that are lighter, flexible and even transparent. MIT developed a microchip processor that works at over 1000 GHZ, which is easily 300 times faster than the best chips commercially available today. It could also revolutionize the world of fiber optic data transfer. With smaller optical modulators, we could transfer data 10 times faster than is currently possible. Graphene’s properties would also allow it to replace indium in solar cells, giving us solar panels that would be cheaper, stronger, flexible, and better suited for mass production. By perforating graphene sheets, it can be made to filter impurities such as dissolved salts, making it into a powerful desalination tool. Because of its extreme thinness, as compared to current filtration standard materials such as polyimide-polysulfone composites, it could reduce the energy needed to create clean drinking water by almost 99%. 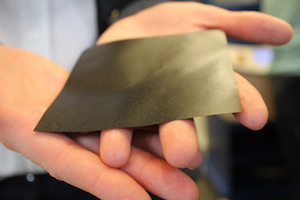 Graphene does, however, have its drawbacks. For one, we have not yet found a cheap, reliable way to mass produce it. Though carbon is not exactly in short supply, the monetary cost created by the synthesis process is still a significant obstacle in its development. Despite being a fantastic conductor, its small band gap makes it unsuited for certain electrical applications. For example graphene by itself cannot successfully generate energy from a traveling photon, making it ill suited for photovoltaic cells. Though this can be fixed by “doping” or lacing graphene with another more photoelectric compatible metals such as silicon, it decreases the efficiency of graphene and adds additional cost to production. Studies have also shown that graphene is toxic to humans. It does, in fact, share some carcinogenic properties with substances like asbestos, in that that the particles, if airborne, are small enough to interfere with humans on the cellular level.