Orientation at the University Farm Photos and Report-Out 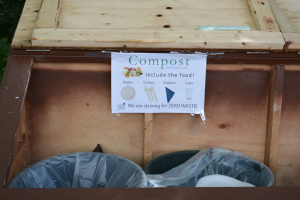 This August, incoming freshmen to CWRU had the opportunity to explore the CWRU Squire Valleevue Farm during their orientation. Students attended sustainability related Think Seminars on a wide variety of topics and some participated in hike and learn sessions. Think Seminars were given by over 30 faculty and staff members including the Office for Sustainability’s Stephanie Corbett and Erin Kollar as well as the Farm leaders Ana Locci and Chris Bond, as well as a variety of other members of the faculty and staff at CWRU. Incoming students were given the opportunity to learn more about the University Farm and how they can engage with the farm during their time at CWRU. As a part of the event, students were served a sustainable lunch, catered by Bon Appetit, which incorporated fresh produce grown at the CWRU farm. The event was also entirely zero waste, as all lunch utensils and plateware was compostable, and composted! Field day games and activities were planned but had to be cancelled because of the threat of thunderstorms.