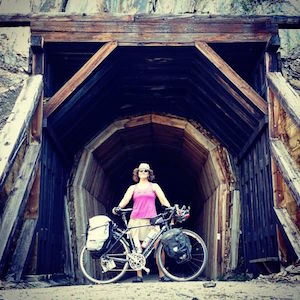 On August 3rd, Shelli Snyder, a 20 year CWRU employee in the Frances Payne Bolton School of Nursing and a passionate bike advocate for the city of Cleveland, left on a 3000 mile journey to relocate to Seattle.  As a testament to her love of cycling, Shelli was completing her journey entirely by bike, raising money for Bike Cleveland as she road.

Tragically, Shelli was struck from behind by a motorist traveling 60 mph while riding through Montana on September 18th.  Shelli suffered a fractured skull with significant brain swelling, and injuries to her arm, leg and hip.  On September 28th, Shelli was life-flighted from Kalispell, Montana to Cleveland, where she continues in a medically-induced coma at MetroHealth. She is currently being weaned off of some medications and showing some positive responses!

Clevelanders and members of the global bike community have been pouring out support for Shelli and her family in many ways: direct donation via a GoFundMe page created for Shelli to the tune of over $80,000, t-shirt, bracelet, and headwear sales, a Critical Mass ride, benefit concerts, Bike Tune-Ups and Ice Cream Flavors at Mason’s Creamery, and even turning the Terminal Tower Pink for Shelli!  A facebook page has even been created to organize all of the love being given to Shelli’s care team at MetroHealth!  Bike Cleveland, which Shelli was instrumental in founding, has been providing updates of Shelli’s progress on their page. Join the CLE for Shelli facebook page to stay up-to-date on all the goings on as events continue to be added, and news in Shelli’s recovery.  Needless to say, everyone is pulling for you, Shelli!