Still Recycling at CWRU Although Cleveland Recycling No Longer Offered 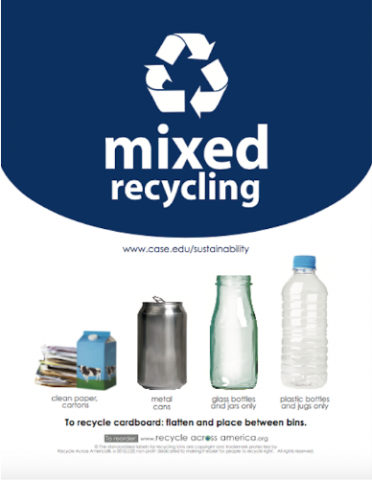 Over the past few years, the City of Cleveland's curbside recycling was reported to have very high levels of contamination. Essentially trash, including lawnmower blades, construction debris, food waste, and much more was in many of the City’s recycling bins causing their vendor to have to reject whole loads regularly and increase fees. Unfortunately at this time, Cleveland residents do not have curbside or drop-off recycling available while the program is reorganized. The Cuyahoga County Solid Waste District states, “The problems experienced by Cleveland were due in large part to residents not recycling properly. Proper recycling reduces the cost of recycling by reducing the amount of non-recyclable material that has to be removed from the marketable materials.” Additionally, Sustainable Cleveland posted a blog article about their commitment to the future of recycling in the city.

CWRU manages its own recycling program. Single-stream recycling is collected from buildings and hauled to the Cleveland Heights Transfer Station by CWRU employees. The recycling is transported from the transfer station to the Kimble Companies Twinsburg Materials Recovery Facility (MRF) where it is sorted and bailed. From there, the sorted materials are sold to companies that will recycle the bails into new products.

Recycling right is more important than ever both on campus and at home. On campus, the following items can be placed in recycling bins:

Corrugated cardboard (or shipping boxes) should be flattened and placed between the bins. Some places on campus still have dedicated paper collection in large blue roll carts in buildings - feel free to use those in lieu of the mixed recycling bins for paper only.

Most of the remaining municipalities in Cuyahoga County are still recycling, despite market challenges. Recycling in most homes is nearly the same as on campus, but you should include your paper and cardboard in your curbside, home recycling bin. The biggest change to recycling in recent years is which plastics are acceptable. The only plastic accepted in mixed recycling streams in Northeast Ohio are items in the shape of a bottle or a jug: no disposable cups, food tubs, or to-go clamshells.