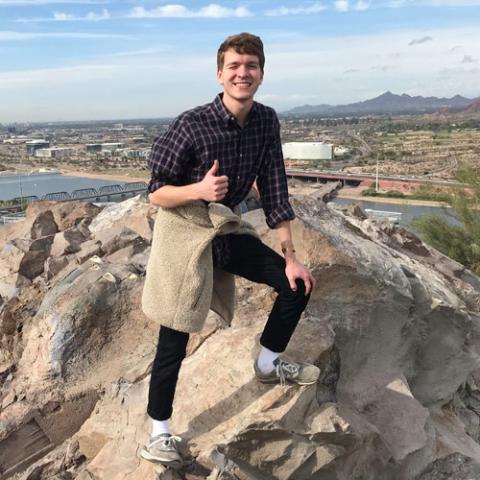 Four years ago, Bradley Schneider (pictured above) had a plan for his future: dual degrees in theater and business. At the end of this month, Bradley will graduate from Case Western Reserve University with both degrees... plus a job lined up in marketing at Ford Motor Co.

Bradley says Case Western Reserve was the only university he considered that offered him the opportunity to pursue degrees in both business and theater, and he loved the campus when he visited.

“I’ve never seen a building like the Peter B. Lewis Building before. I mean, I’ve seen the Walt Disney Concert Hall, but I don’t expect to take an economics class there,” he says, referencing the Los Angeles venue also designed by the world-renowned architect Frank Gehry.

He found surprising overlap between the two majors—much of what he learned in his theater courses, such as creativity and empathy, could be leveraged in his business degree and applied during his four business internships.

Schneider credits the applicability of the course content in both majors to his success during his strategy internship with Ford last summer, which led to the job offer from the company.

Ready to put your plans in motion? CWRU will get you there.