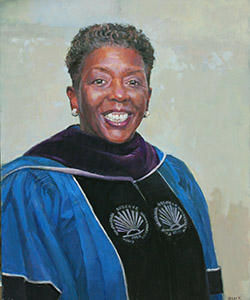 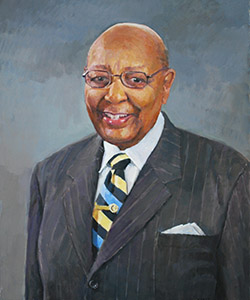 The Trailblazer Project is the portraiture initiative of the Office for Inclusion, Diversity and Equal Opportunity, honoring distinguished Case Western Reserve University alumni, faculty and administrators of color and women.

Portraits are placed in locations across campus:

Three distinguished alumni were honored for being trailblazers in their respective fields during the Third Annual Trailblazer Project Unveiling Ceremony, held October 12 during CWRU Homecoming Weekend.

Those honored, from left to right, include the late Samuel Allen Counter, Jr., PhD (GRS '70), represented at the ceremony by his daughter Philippa Counter Hogstadius; M. Deborrah Hyde, MD (MED '77), who was represented by her longtime friend Deborah Blades, MD; and Wilma Peebles-Wilkins, PhD, DPNAP (SAS '71), Dean Emeritus at Boston University and former scholar at the John Hope Franklin Center at Duke University, who spoke during the ceremony. Peebles-Wilkins has also written extensively on the history of blacks in American social welfare.

Six distinguished Case Western Reserve University alumni of color and former faculty members who are “trailblazers” in their respective fields were honored at an unveiling ceremony of the 2018 Trailblazer Project portraits, during the CWRU Homecoming Weekend. Family members and friends of honorees as well as alumni and members of the CWRU campus community attended the ceremony, which was held on October 13, 2018 in the Thwing Atrium.

A portraiture initiative aimed at showcasing the contributions of Case Western Reserve University alumni of color and women and diversifying the images that appear in campus common areas was initially unveiled October 7, 2017. The inaugural event honored six distinguished alumni of color who have made history at Case Western Reserve University, in the community and beyond.

The "Trailblazer Project" will bring to campus portraits of alumni of color and women who have made significant contributions in their professions, community and/or to the university.

The initiative will be an ongoing project and portraits commissioned for the project will include, but not be limited to, African Americans, Asian Americans, Latino Americans and American Indians. Portraits will be placed in the Kelvin Smith Library and may be placed in other locations in the future.

Individuals included in phase one of the project included:

The Trailblazer Project is being sponsored by the Office for Inclusion, Diversity and Equal Opportunity, Kelvin Smith Library and Division of Student Affairs. In addition, the project is expected to be supported by alumni, donors and external partners.