CASE HALL, opened in 1867, was a noted concert and lecture hall located on Superior on the west side of what is now East. 3rd Street.  Its construction, begun in 1859, displaced private residences on Superior and necessitated the moving of the ARK, the meeting place for Cleveland's literary and scientific leaders.  The structure cost $200,000 and was designed by architect CHARLES W. HEARD.  It was the first structure in the city to have a mansard roof.  Heard and Son would later (1875) design the Case Block, which stood on the east side of what is now E. 3rd and Superior a portion of which, would serve as CLEVELAND CITY HALL until 1916.

Stores occupied the first floor of Case Hall and offices the second.  The third floor auditorium seated 2,000 on "patent opera chairs" and boasted a decor by the Italian artist Garibaldi.  Over the years, Case Hall was a stopping place on the lecture circuits of Horace Greeley, Henry Ward Beecher, and Mark Twain. German Clevelanders held a Peace Jubilee there at the end of the Franco-Prussian War, and English citizens celebrated the Golden Jubilee of the reign of Queen Victoria. The hall was the meeting place of the First Unitarian Society of Cleveland, and of the first convention of the National Association of Woman Suffrage. In addition to cultural, social, and religious events, the building housed the CLEVELAND LIBRARY ASSN., and by 1876 featured animal exhibits of the Kirtland Historical Society. Despite its fame as a cultural center and local landmark, Case Hall was converted totally to office space in 1894, its first tenant being the Citizens Savings & Loan. In 1902 the Case Hall was leveled to make way for the United States Post Office, Custom House, and Court House, known currently (2019) as the HOWARD M. METZENBAUM U.S. Courthouse. 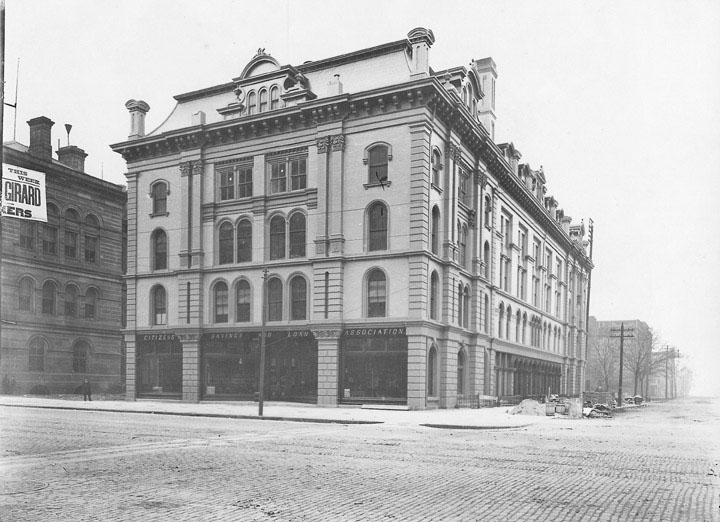 Case Hall as it appeared in the early 1900s. WRHS.
Article Categories
Business and Industry
Architecture
Libraries and Museums