Cleveland Municipal Airport, or Cleveland Airport (it would not be called Cleveland Hopkins until 1951), was host to a number of aviation milestones: 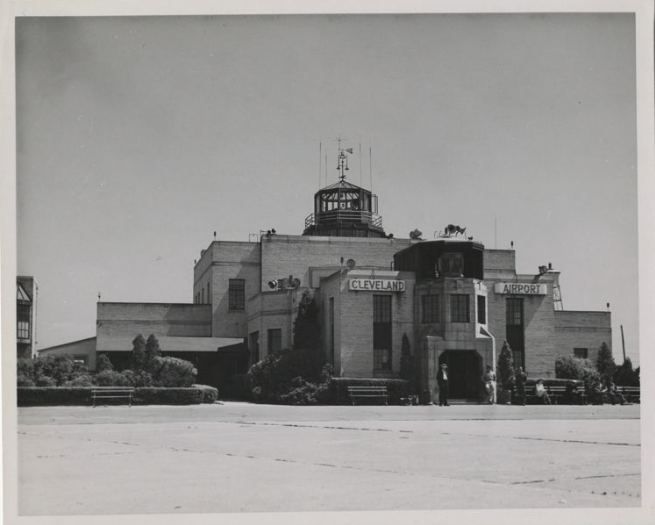 Cleveland Airport became a reality In 1925,when Cleveland’s first City Manager, WILLIAM ROLAND HOPKINS, obtained City Council agreement to issue bonds to build the airport on 1,040 acres of land, and the Federal government was satisfied that the city could provide an adequate facility for U.S. Air Mail planes.

At first, skeptics scoffed at the long-distance between downtown Cleveland and the new airport, but this proved to be a non-issue. Streetcars and other forms of public transportation could cover the distance in about a half-hour.

The airport construction was led by Major John Berry, a renowned airfield expert. Berry became the manager of the airport and then commissioner of airports, a position he held until 1953. Clearing and grading took place at record speed so that the U.S. Air Mail could inaugurate night flights on 1 July 1925.

On 7 June 1925, the navy super dirigible Los Angeles was supposed to be the first aircraft to make “official” use of the new airport when it parachuted a message as it flew over the airport on its way from Lakehurst, NJ to Minneapolis, MN but the flight didn’t go as planned. Due to the weather, the airship was two hours late and dropped the cylinder with the message over downtown Cleveland instead of the airport. The cylinder contained a letter addressed to the mayor of Madison, WI, instead of the mayor of Cleveland. Shortly after, the airship turned around and headed back to Lakehurst because of engine trouble.

On 1 July 1925, an estimated 100,000 people clogged the roadways for the opening of Cleveland Airport. The event kicked off with night flying stunts illuminated by giant searchlights and the inauguration of night airmail service between New York and Chicago. It would be two more years before Charles Lindbergh would fly the Spirit of Saint Louis across the Atlantic.

Due to the foresight of Hopkins and Berry, Cleveland Airport could easily expand. The airport grew from 400 acres and a landing field in 1925 to 1,800 acres and three main runways as of 2022.

In 1925, Cleveland Airport was the first airport in the country to be served by a commercial carrier when STOUT AIR SERVICES INC., in support of the FORD MOTOR COMPANY, established scheduled passenger service from Detroit to Cleveland. The cost of a plane ticket precluded all but the wealthy from partaking in these early flights.

The strategic location of the new airport on major airmail routes made Cleveland Airport one of the busiest in the U.S., serving 4,000 aircraft the year it opened and reaching 17,600 by 1928.

Flying mail in those early days was an extremely hazardous job. Cleveland based pilot, Shirley J. Short, flew airmail on the Cleveland to Chicago route. In 1926, Short was the American recipient of the Harmon Trophy, an international award given to the most outstanding aviator in each of twenty-one countries. That year, Short flew 718 hours without any serious accident in all kinds of weather, through winter and summer on regularly scheduled trips, 47% of which were night flights. Short received the award at a ceremony at the White House.

Short died in the crash of the 1929 Bellanca TES X-855e "Blue Streak," an experimental two-engine airplane owned by The Chicago Daily News on 26 May 1930. 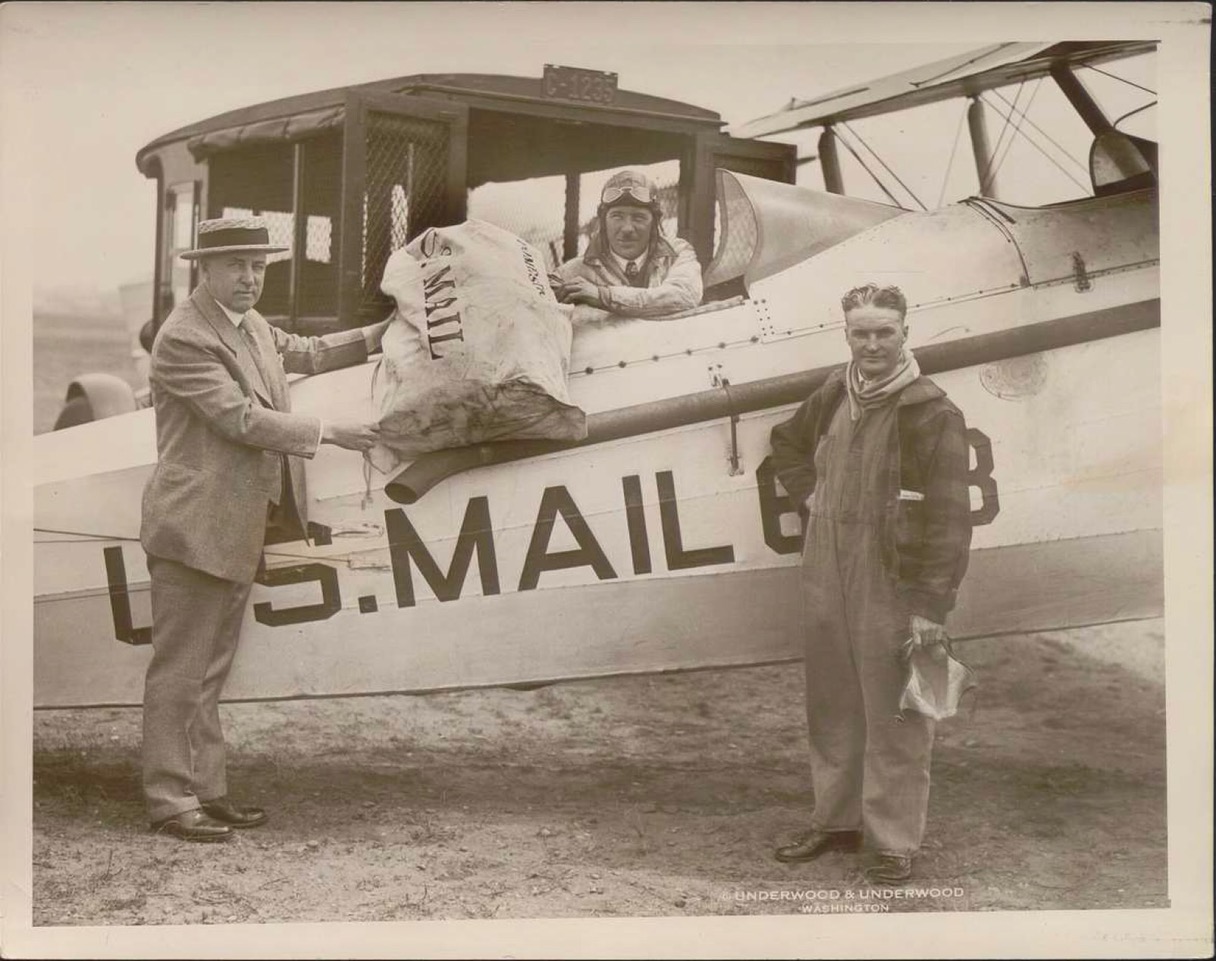 Initially, the airfield consisted of runways that intersected on a large sod "allway" mat (36,000 by 42,000 feet long), allowing planes to land simultaneously in different directions - a process designed to prevent pilots from waiting for space to land.

In 1929 Cleveland Airport was the first in the nation to open a passenger terminal. Designed to serve 250 passengers a day, the terminal contained the world's first air traffic control tower -- a tall, glass-enclosed structure with a 360-degree view of the airfield. In addition to a passenger waiting area and control tower, the new terminal included space for a weather bureau, post office branch, restaurant, airline ticket office, airport management offices, and pilots' quarters.

Due to the size of the airfield, Cleveland Airport was chosen in 1929 to host the NATIONAL AIR RACES. The National Air Races were important in promoting air travel and advancing aircraft research and development. The races were held in the city from 1929-1949, with the exception of 1930, 1933, 1936, and the war years of 1940-45.

In the early years of aviation, night flying was severely hampered by the lack of airfield lighting. An aeronautical technician working for the City of Cleveland, Claude F. King, solved this problem in 1930 by inventing the nation's first airfield lighting system – a 3 million candle power beacon to identify the airfield for aviators, in addition to a 1.5 billion candle power floodlight which illuminated the field.

In 1930, Claude King invented, constructed, and installed the first airplane-to-tower communication system in the country at Cleveland Airport. Air traffic was directed by well-trained city personnel who used radio equipment borrowed from the U.S. Coast Guard. The Federal Communications Commission issued the first four tower radio operator's licenses in the country to Cleveland city employees. The city ran the tower until February 1943, when the Civil Aeronautics Authority, later renamed the Federal Aviation Administration, took over the control tower's function and operations. 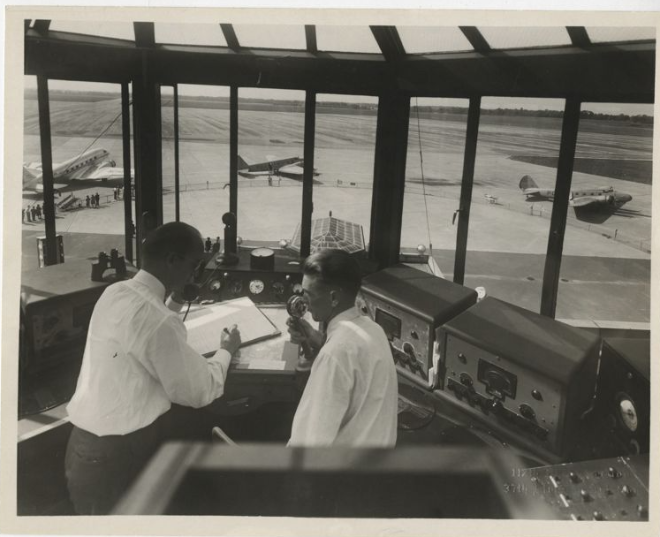 During World War II, the area around the airport's periphery became a vital part of the war effort. In 1941, the National Advisory Committee for Aeronautics (NACA) laboratory opened on its western end. The laboratory initially conducted research on airplane engines before turning into the NASA Lewis Research Center in 1958 (renamed the NASA John H. Glenn Research Center at Lewis Field in 1999). The center played a crucial role in the drive to put a man on the moon.

In 1942, the Cleveland Bomber Plant, known through most of its history as the Cleveland Tank Plant, opened nearby in what is now the I-X CENTER. Here, workers-built B-29 aircraft bombers that would take off from the airport to wherever they were needed when finished.

Designed to serve as an auxiliary airfield for Cleveland Airport, BURKE LAKEFRONT AIRPORT (named for then Cleveland mayor Thomas A. Burke) opened in 1947 as the United States' first downtown airport.

In 1951, City Council renamed the airport, Cleveland Hopkins, to honor William Hopkins, the mastermind behind the drive to build the airport. To accommodate the ever-increasing number of airline passengers, the construction of a new terminal began in 1953. The terminal's design was developed by applying the Columbus School for the Blind techniques, which permitted smooth one-way movement throughout the airport. By 1956 concourses A and B were completed. B consisted of a single floor, a ramp tower at the end, and an observation deck above. By the mid-1950s, all of the original structures at Cleveland Hopkins had been razed to make way for expansions.

The first part of the preparation for the jet age was the construction of the two-floor concourse C, which opened in 1969. This was followed by the extension, widening, and addition of an extra floor for concourses A and B. Other improvements included creating an elevated roadway closer to the terminal and moving luggage claim strips.

The 1960s saw two more Cleveland airports “firsts.” The first emergency medical technician program at an airport was established at Cleveland Hopkins in 1965. The first direct rapid transit link from an airport to downtown of any North American city was launched on 15 November 1968. Passengers could board the west side rapid in the TERMINAL TOWER and arrive at Cleveland Hopkins 25 minutes later, at the cost of only 35 cents. In 2022,  the ride cost $2.50 and during peak arrival and departure times, departed the airport every fifteen minutes.

In 1974, a $60 million renovation of the terminal building and concourses improved efficiency and convenience. The west and north concourses were reconstructed with second floors to accommodate passenger loading jetways. A second level was added to the terminal where the ticketing level and elevated departing roadway are located today, and a mechanized baggage system was installed. The project was completed in 1982.

In 1978, the hub-and-spoke system became the norm for most major airlines after the U.S. federal government deregulated the airlines. Under the direct-route, or point-to-point system used before deregulation, airlines were forced by the federal government to fly directly between two small markets. This resulted in many flights that were routinely half empty, which resulted in airlines losing money. The hub-and-spoke system aims to save airlines money and give passengers better routes to destinations.

Cleveland was a hub for United Airlines until the mid-1980s. After United moved its hub operations to Washington-Dulles, Continental Airlines (which was a separate carrier and lacked a Midwest hub) added capacity to Cleveland, as did USAir, which was the dominant carrier at the airport from 1987 until the early 1990s. While USAir soon reduced its schedule from Cleveland, Continental increased its hub capacity, becoming the airport's largest tenant and eventually accounting for upwards of 60 percent of all passenger traffic.

The lengthening of Runway 5 Left/23 Right in the late 1980s added another 1,800 feet of runway to improve air carrier operations and enhance safety.

In 2000, the year before the 9/11 attacks, Cleveland Hopkins handled 13.3 million passengers, a number the airport has never reached since. In 2008, a significant modernization of the airfield greatly improved safety and capacity, albeit at a time of decreasing flight operations.

When United and Continental merged under the United brand in 2010, United reduced its capacity in Cleveland, which had already substantially reduced in the wake of the 2008 financial crisis. In June 2014, United Airlines effectively terminated its hub operation at the airport, reducing its daily departures by more than 60%. United also closed concourse D and consolidated all of its remaining operations in concourse C. Although United closed the Cleveland hub, it still has a flight attendant base, pilot base, and maintenance facilities at Cleveland Hopkins and is one of the largest carriers.

In 2013, the airport demolished its aging, 2,600-space Long Term Garage, replacing it with a 1,000-space surface lot. This created a parking shortage and daily lot closings when parking lots would become full. In 2015, the airport moved the pick-up and drop-off location to the former limo lot. They made the Ground Transportation Center a permanent fixture in 2017.

In 2022, over 4,000 people worked at Cleveland Hopkins. The Department of Port Control employs approximately 280 more people to administer the airport and operations and maintain the terminal, airfield, runways, and landside facilities.

Cleveland Hopkins today is a self-sufficient, non-profit facility with an annual budget funded by airport users through landing fees, rentals, and other charges. Although the City of Cleveland owns the airport, no taxpayer dollars are used for its operation.