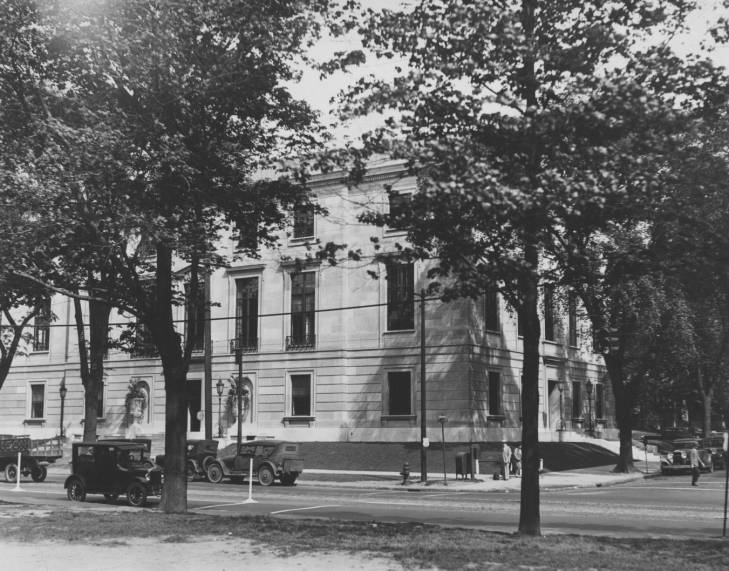 The DITTRICK MEDICAL HISTORY CENTER is a museum which displays and archives medical artifacts, instruments, and books, and is now part of the College of Arts and Sciences at CASE WESTERN RESERVE UNIVERSITY. Free to the public, the Dittrick aims to educate visitors about “the experience of individuals and society as they grappled with changing conceptions of health and medicine.” The museum is located within the ALLEN MEMORIAL LIBRARY. The ideals and creation of the museum trace back to the prominent Cleveland surgeon DR. PETER DUDLEY ALLEN and his wife, philanthropist ELISABETH SEVERANCE ALLEN PRENTISS.

Dudley Peter Allen grew up in Kinsman, Ohio, and eventually settled nearby in Cleveland in 1883 where he continued to work as a professor and surgeon. Allen was passionate about recording and writing histories of local medicine, and came to lead a historical committee created by the CLEVELAND MEDICAL LIBRARY ASSOCIATION in 1898. Through this committee, Allen meticulously stored and cared for medical artifacts donated to the CMLA. Many of these momentos were collected and donated by Allen himself. The CMLA displayed this modest but growing collection of artifacts in their headquarters on Prospect Avenue - creating a small museum in 1906 which served as the foundation for the Dittrick. Allen fostered this collection with great care and continued to collect until his death in 1915.

Elisabeth Severance Prentiss, a prolific patron of art and medicine in Cleveland, wished to honor her late husband’s love for antiques and medical history. Prentiss, previously Mrs. Allen, provided funds to construct a generous gift of learning in Cleveland, calling for the creation to be both a library and museum. The Allen Memorial Medical Library, designed by the Walker and Weeks architectural firm, finally opened in 1926 after a dedicatory address by neurosurgeon and native Clevelander Dr. Harvey Cushing. In his address about “the doctor and his special books”, Cushing paid tribute to Allen and emphasized the importance of medical libraries, stating that “books no less may be to the individual doctor his greatest source of relaxation, his greatest solace in times of trouble.”

With the unveiling of the Allen Memorial Medical Library, Howard Dittrick was named curator of the new museum, which was housed unconventionally on the third floor. Dittrick continued Allen’s tradition by collecting artifacts both locally and around the world. Ever the avid international traveller, Dittrick gained invaluable experience by visiting other medical history museums across Europe. Collecting at a time when the demand and market for medical antiques was relatively low, Dittrick acquired a great variety of artifacts at very little cost. Due to this comprehensive and diverse array of collections, the museum was renamed in 1998 as the Dittrick Medical History Center.

The Dittrick now houses renowned collections from across America and the World, featuring rare books from Charles Darwin to a physician to the Holy Roman Emperor. The Percy Skuy Contraception Collection, phased in beginning in 2004, includes over 1100 artifacts, with a comprehensive selection of historical contraceptive devices and literature. The display invites guests to survey conventional contraceptive methods and medical progress as well as the dangers of the “longstanding ignorance of essential facts of human contraception.” The museum also features several online exhibits, ranging from the smallpox epidemic to a virtual overview of Cleveland medicine in World War I. Online visitors also have access to a detailed visual archive of prominent artifacts housed in the Dittrick.

First overseen by the Cleveland Medical Library Association, the Dittrick is now supervised by the College of Arts and Sciences of Case Western Reserve University. The center now also serves as an interdisciplinary studies area. Students, researchers, medical professionals, and the public can visit free of charge. In 2018, Amanda L. Mahoney took over for the retiring James Edmonson as chief curator.