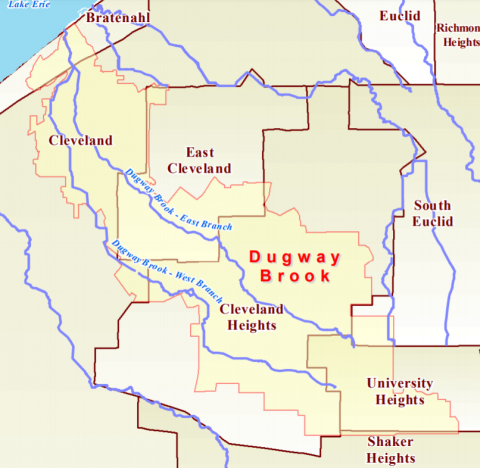 DUGWAY BROOK, a tributary which feeds directly into Lake Erie, is a historic and neglected bluestone stream which now runs largely hidden away and culverted beneath Cleveland, Ohio. While Dugway Brook is one of Cleveland’s smallest surviving tributaries, it still cultivates diverse ecologies by providing protective breeding and feeding grounds for aquatic species at its stream mouth. Due to rapid urbanization throughout the 20th century as Cleveland transformed into a major manufacturing center, Dugway Brook disappeared into drains and pipes beneath new streets and properties. Today, Dugway Brook’s deterioration produces significant negative environmental ramifications, but has yielded several hopeful revival movements.

Dugway Brook boasts two branches, beginning separately in UNIVERSITY HEIGHTS and SOUTH EUCLID. Both sections run culverted through many of Cleveland’s well travelled city streets, with the East branch circulating under Meadowbrook Road in CLEVELAND HEIGHTS, and the West branch passing under the stores and cafes of COVENTRY VILLAGE. The East and West branches merge in GLENVILLE, then combine to form a single outlet which flows into Lake Erie from BRATENAHL.

Dugway Brook has endured drastic reductions in visibility over the last 100 years. The industrial boom in Cleveland paired with suburban development spelled out a dire fate for Dugway. Between 1908 and 2002, Dugway Brook’s healthy streams, which enjoyed major plots of aboveground natural vegetation, were rebuilt and fragmented until few areas remained unaltered by urban sprawl. Now, nearly 95 percent of the waterway travels through culverts beneath Cleveland’s roads and trails. Despite 50 percent of the watershed flowing through Cleveland Heights, only a meager 300 yard sliver can be viewed from the surface.

Environmental concerns over Dugway Brook began during a series of floods in the 1960s and 1970s which hit Cleveland’s UNIVERSITY CIRCLE district particularly hard. This spurred the construction of a massive poured concrete dam within LAKE VIEW CEMETARY as the first project of the Northeast Ohio Regional Sewer District. The dam, which stands over 90 feet high and spans 500 feet, was completed in 1978.

Years of neglect have taken a social and environmental toll on Dugway Brook. Buried by urbanization, the natural habitats and vegetation cycles around the waterway have been disrupted and splintered. The miles of unfiltered culverted water is plagued by pollution during storms. However, conservation efforts persevere for Dugway and the surrounding areas. In Bratenahl, the Dale-Ross Preserve holds 12 wooded acres on both sides of the Dugway estuary. Bratenahl acquired a Federal Coastal & Estuarine Land Conservation program grant in 2007, aided by the Western Reserve Land Conservancy.

Obscured beneath decades of industrial development, Dugway Brook’s ancient and winding waterways go largely unappreciated. The intersections between Dugway and the human world, from homesteads to towering dams, still stand as grand reminders of a hidden history. While fading from public memory, the dedicated efforts of conservationists suggest an optimistic future.