KAPPANADZE, JASON R. (1874-15 Apr. 1962), GEORGIAN Orthodox pastor of ST. THEODOSIUS RUSSIAN ORTHODOX CATHEDRAL, was born in the village of Sviri, Tiflis Guberniya, Caucasus Krai, RUSSIAN EMPIRE (today Samtskhe-Javakheti Province, Republic of Georgia), son of Roman Kappanadze. He graduated from Tiflis Seminary in 1894, the same year in which Joseph Stalin enrolled at the same seminary. Kappanadze was subsequently sent by the Russian government and church to Kodiak, Alaska, to run a parochial school in 1895. The following year, he married Mary Kashevaroff. Ordained into the priesthood in 1898, he worked in Alaska and Pennsylvania before coming to Cleveland in 1902 to St. Theodosius, where he directed the acquisition of St. John's Convent property. In 1908 he returned to the Russian Empire as professor of theology at Kutais seminary in western Georgia.

During WORLD WAR I, Kappanadze was regimental pastor in the Imperial Russian Army. In 1918, he went to the 5th century Sioni Cathedral of the Dormition in the Georgian capital Tiflis (Tbilisi). That same year, Georgia declared its independence from the Russian Empire as the former tsarist state descended into a civil war between the Reds (the Bolsheviks) and the Whites (anti-Bolshevik forces).  By 1920, the Reds had turned the tide in the civil war and absorbed the independent Caucasus republics of Azerbaijan and Armenia. Georgia came next and it was Sovietized by the Bolsheviks in 1921 in an operation led by Stalin and fellow Georgian Bolshevik Sergo Ordzhonikidze. Kappanadze and his family escaped from their homeland during this time, with help from the American Near East Relief and passports from a Soviet official who was his son's former classmate.

Kappanadze returned to Cleveland and St. Theodosius in 1922, remaining until his retirement in 1957, establishing social centers and developing the a capella choir, while also helping form Russian Orthodox parishes in Detroit, Akron, and Lorain. Kappanadze advanced to protopresbyter, the highest office open to a married Orthodox priest. In the early years of his tenure, he fought off encroachments on the cathedral by the Living Church, a schismatic movement within the Russian Orthodox Church backed by Soviet intelligence.  He also commissioned noted RUSSIAN émigré artist Andrei Bicenko to decorate the interior of St. Theodosius with stunning fresco art and assisted him in choosing which Biblical scenes to paint.  Notably, Bicenko forever immortalized Kappanadze by painting his likeness into the mural. After retiring and becoming pastor emeritus at St. Theodosius, Kappanadze was chaplin at the Brotherhood of St. John Home for the Aged near Hiram. Unfortunately, he and his wife were killed in an automobile accident. They were buried in St. Theodosius Cemetery and were survived by their two children, Roman and Nicholas. 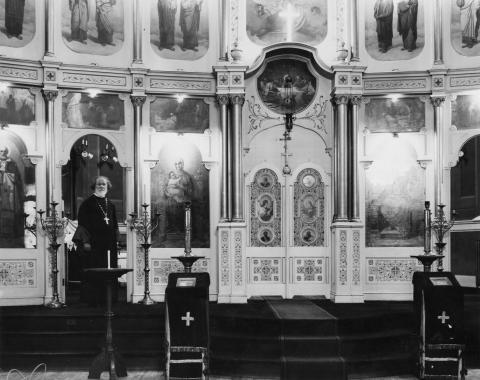