The MALL and the 7 public buildings surrounding it were constructed following the Group Plan of 1903, which probably constitutes the earliest and most complete civic-center plan for a major city outside of Washington, DC. Since federal, county, and municipal governments were all planning to build large new structures, a Group Plan Commission was created in 1902 as a result of bills prepared by the American Institute of Architects and the Cleveland Chamber of Commerce and passed by the legislature. The members were Daniel Burnham, Arnold Brunner, and John Carrere.

The Group Plan Report of 1903 recommended the 500' wide central mall and the placement of the major buildings. The need for uniformity of style and building height was stated as the lesson of the Chicago Columbian Exposition of 1893. The Roman style was recommended, meaning the Beaux-Arts version of ancient classicism. The report was supported by Progressive mayor TOM L. JOHNSON, and the significance of the conception was recognized by laudatory articles appearing in national journals. 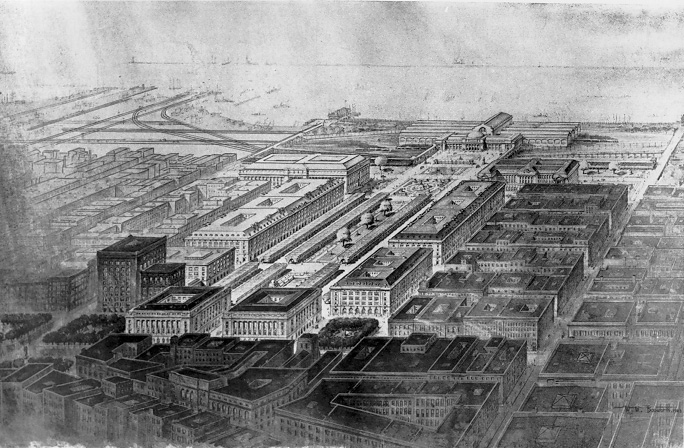 Bird's-eye view of the 1903 Group Plan by Daniel Burnham. WRHS.

The previously planned Federal Bldg. was completed in 1910, followed by the CUYAHOGA COUNTY COURTHOUSE (1911), the CLEVELAND CITY HALL (1916), the PUBLIC AUDITORIUM (1922), the main Public Library (1925), the Board of Education administration building (1930), and the Cuyahoga County Administration Bldg. (1957).

Between the Courthouse and City Hall, suspended over the railroad tracks, was planned a grand new Union Depot to close the north end of the Mall and provide a beautiful vista to arriving travelers. The United States Railroad Administration opposed the station because the tracks, the Water Front Line of the New York Central Railroad, were too valuable to cross-country traffic, especially during World War I, to have local traffic tying it up. As a result, local traffic was directed to enter the city from the south, leading to the Orange Avenue Freight Station (later the site of the Main Post Office), the Nickel Plate freight station, the NORTHERN OHIO FOOD TEMINAL and the CLEVELAND UNION TERMINAL all arriving in that direction. Trains were not allowed to re-enter the main line until well clear of downtown, hence the long Cuyahoga Viaduct across the Cuyahoga, later used by the GCRTA Red Line.

At the south end, the WAR MEMORIAL FOUNTAIN with a tall symbolic bronze statue by Marshall Fredericks was completed in 1964. In the early 1960s, the entire north mall was excavated to create a vast underground convention center connected to the Public Auditorium, and the Hanna fountains were installed on the surface, flanked with trees and plantings. In connection with the SOCIETY CTR. complex opened in 1991, a parking garage was created under the War Memorial plaza.