The PERRY MONUMENT commemorating the victory at the Battle of Lake Erie by Commodore Oliver Hazard Perry (1785-1819) was sculpted by Wm. Walcutt and dedicated on 10 Sept. 1860 in the center of Cleveland's PUBLIC SQUARE. Figures of a midshipman and a sailor boy, also sculpted by Walcutt, were placed on either side of it in 1869. Perry Monument In 1878 the statue was relocated to the southeast section of Public Square, where it remained until replaced by the SOLDIERS & SAILORS MONUMENT in 1892. The Perry Monument was placed in storage until ca. 1894, when it was relocated at a small lake in WADE PARK near UNIV. CIRCLE. The monument was moved again in 1913 to make way for the construction of the CLEVELAND MUSEUM OF ART, being relocated in GORDON PARK on Lake Erie. In 1929 the EARLY SETTLERS ASSN. commissioned the casting of 2 bronze replicas to replace the deteriorated original monument; one was sold to the State of Rhode Island, and the second replaced the original in Gordon Park. The Walcutt original was given to the city of Perrysburg, OH. Cleveland's replica was moved once again to Huntington Park adjacent to the CUYAHOGA COUNTY COURTHOUSE, where it was rededicated on 13 Sept. 1991. 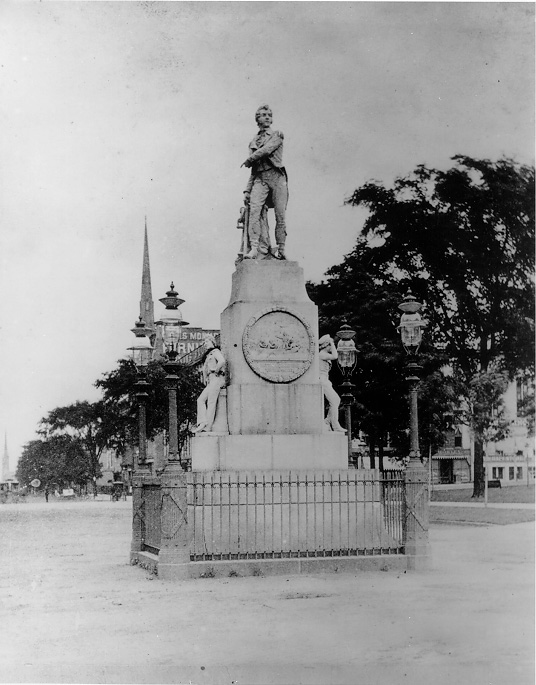 The Perry Monument stands at the center of the intersection of Ontario and Superior in this 1870s photograph. WRHS.